If you couldn’t tell by my super catchy title, this is a recollection of the 2014 Yakattack Tournament out of Twin Lakes State Park, Farmville, Virginia as told by Josh Dolin. Eventually I’ll get Grant to type something up, but for the time being, you’re stuck with me. It’s probably for the best anyhow considering I haven’t really written anything in a few years and I could use a little practice. Anyhow, here we go…

After a long week of work and recovering from the spanking I was dealt at the Shad Shootout the weekend prior I began to get pumped for the upcoming event in Farmville. Generally I don’t fish many tournaments and it just so happens that two of the three that I fish fell within the same week. Luther Cifers, owner/operator of the Yakattack brand, and his crew, put on a great event. I’d be lying if I said I hadn’t been looking forward to it since last year’s tourney. Between the great people, the good food, and the overall positive fishy atmosphere, it’s definitely somewhere every kayak angler should be, regardless of experience. Though all that is great we’ll come back to that later, it’s time to talk fish.

I rigged up Thursday night with plans of prefishing all day Friday. I really got lucky that we weren’t too slammed at work, which is rare, thus allowing me to take the day off. I woke up at around 3 a.m. Friday morning to sort of get up to speed for the day ahead. Even though I’m still considered to be “young” by most guys reading this, I’m finding it harder and harder each passing trip to just jump out of bed and hit the road. To prevent me from snoozing through my alarm and getting on the water late, this usually leads to me either, driving through the night and sleeping in the boat ramp parking lot….. or doing what I mentioned prior. With the truck loaded I hit the road, making it to the lake just before sunrise. I took my time prepping the yak and at 7 a.m. I hit the water, by 7:15 I stuck my biggest bass to date! 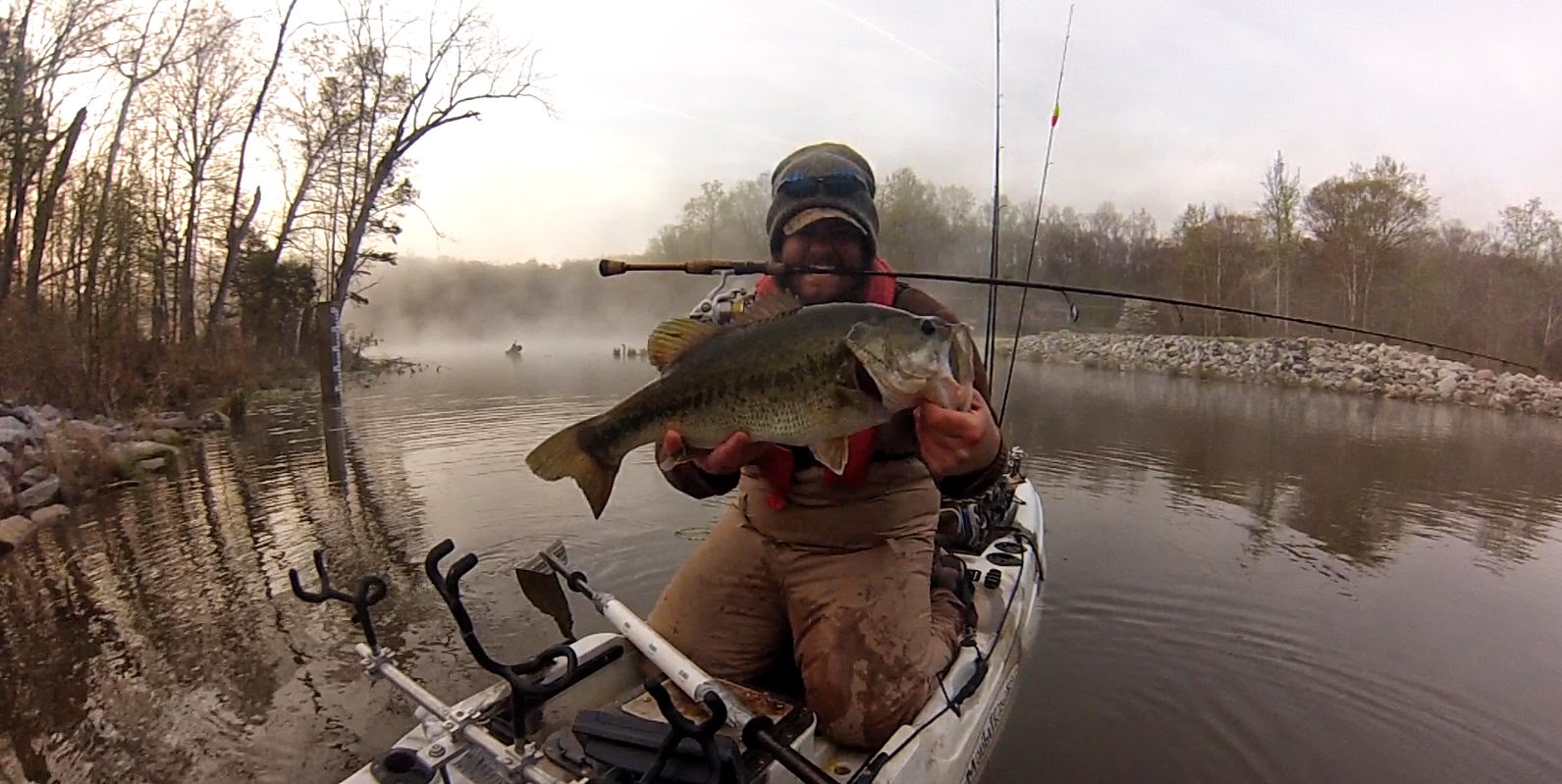 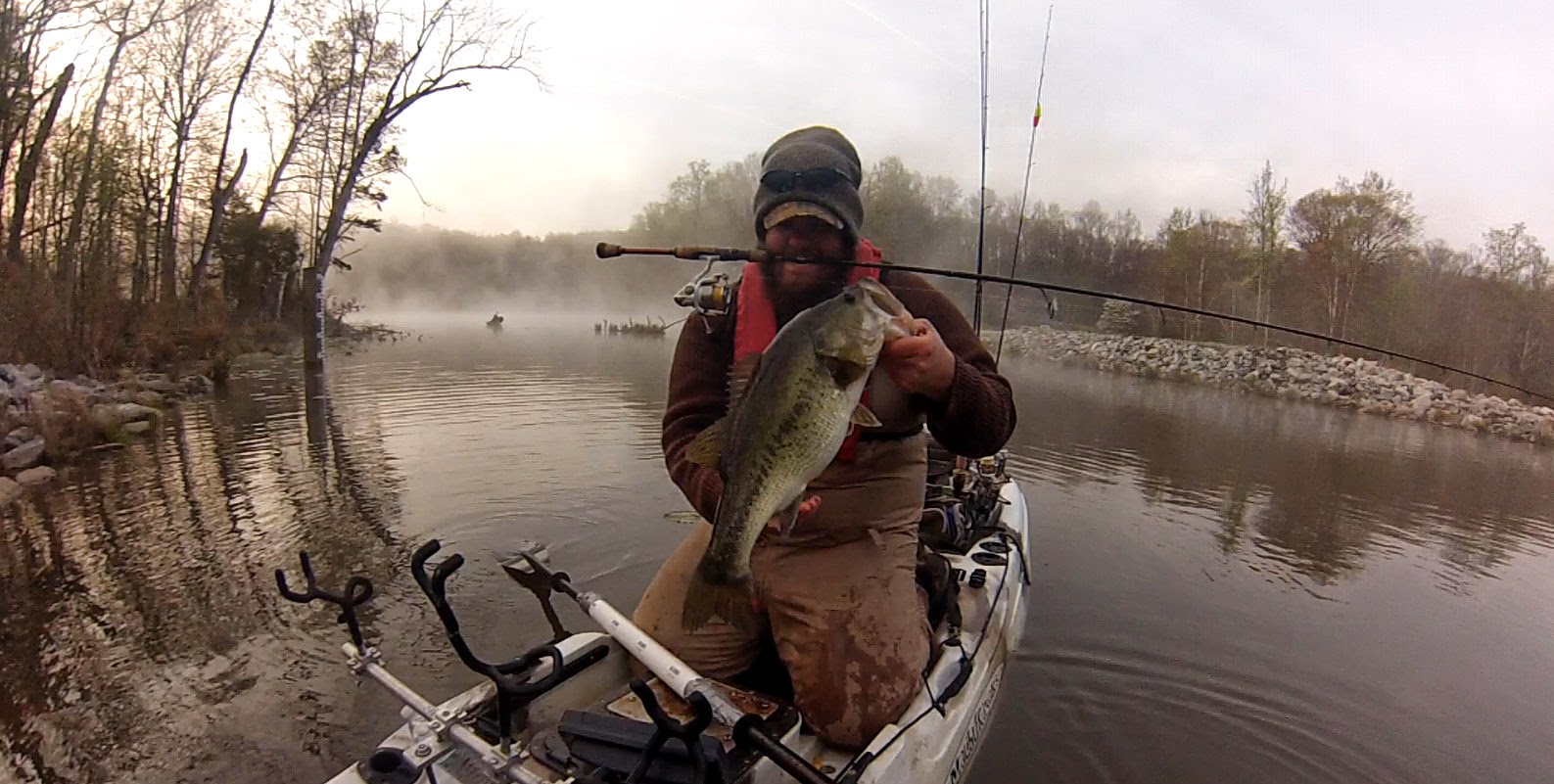 (She went 23 inches and somewhere in the 7lb range)

With my adrenaline pumping I wasn’t sure whether to be happy, or mad that I took a chance at a good fish away from my tourney hopes. Either way it was my first citation largemouth and I’m still riding the high of it! Though I started the day with a bang I ended it with a whimper, nothing but a big goose egg for bass, although I did find the crappie I was looking for so that kept me in good spirits. 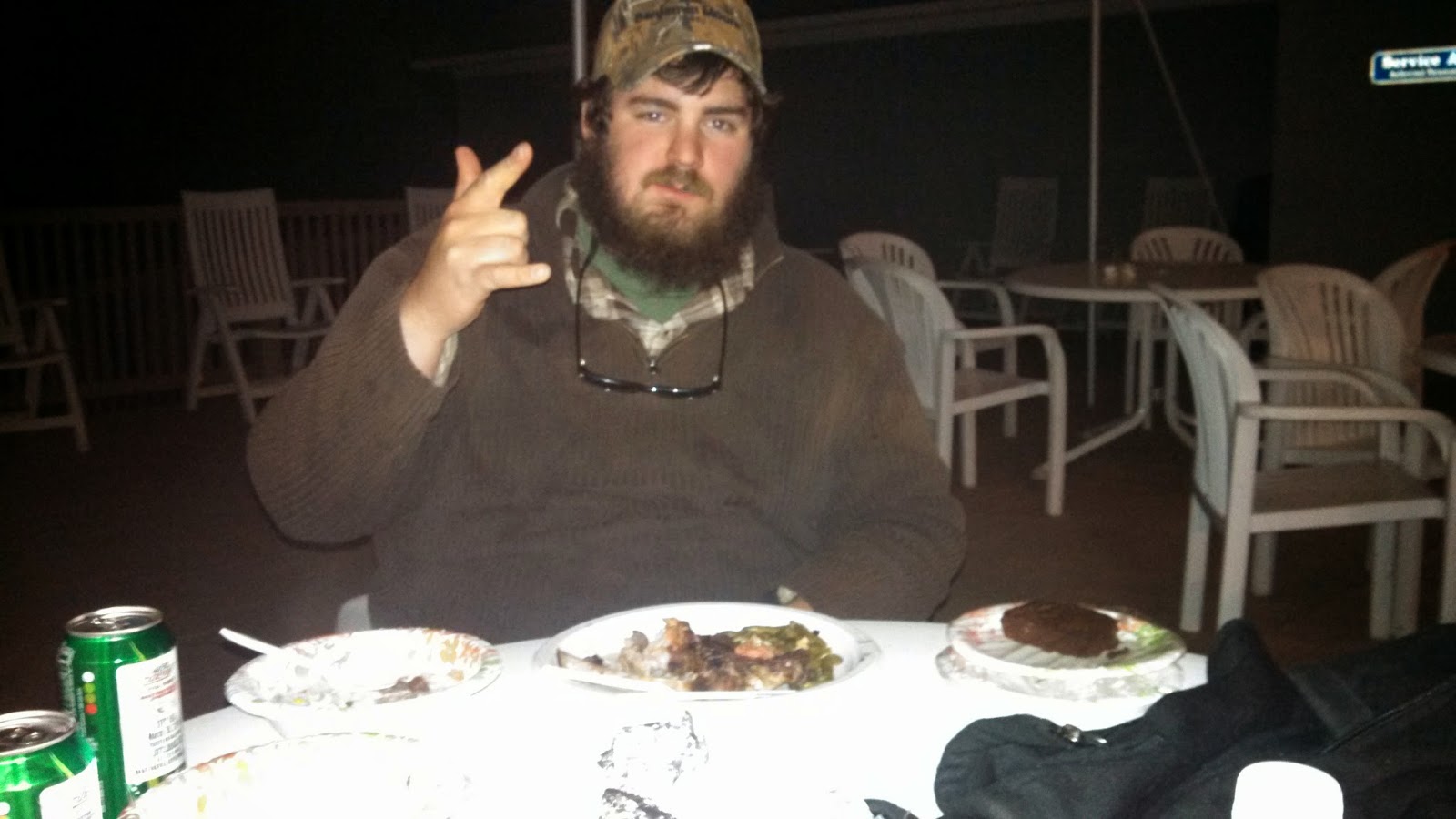 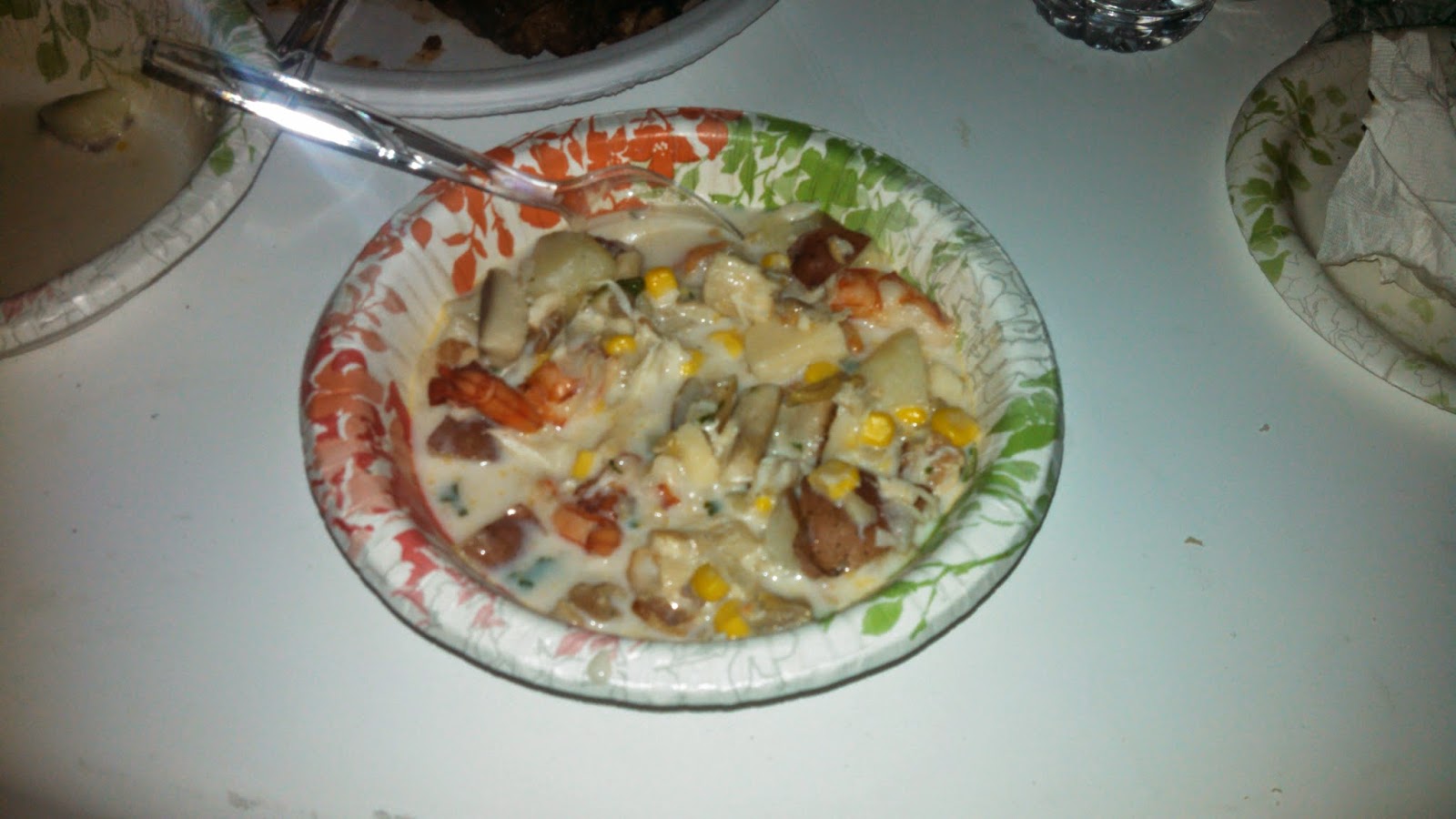 Grant and I discussed over the awesome steak dinner and seafood chowder, that, the Crappie was going to be the golden ticket to winning the slam. It usually is with this tournament, but it seemed to be a more profound objective with the ever deteriorating weather conditions that seem to plague these kayak tournaments. After stuffing ourselves to the max we took a walk down to the lake adjacent to the conference center to see if there was any life in it. Sure enough, there sat two nice bucketmouths, one about 17 inches long, the other, the female, about 20-22 inches long. This discovery played a profound role in my game planning for the next day’s fishing. With Grant fishing Sandy all day I knew I wanted to mix it up a little. I usually stick to one location when fishing these tournaments and up until that point it hadn’t been very successful. I decided to stay mobile throughout the day, driving as far from Twin Lakes as I could to start, and hitting every good spot I could on my way back. 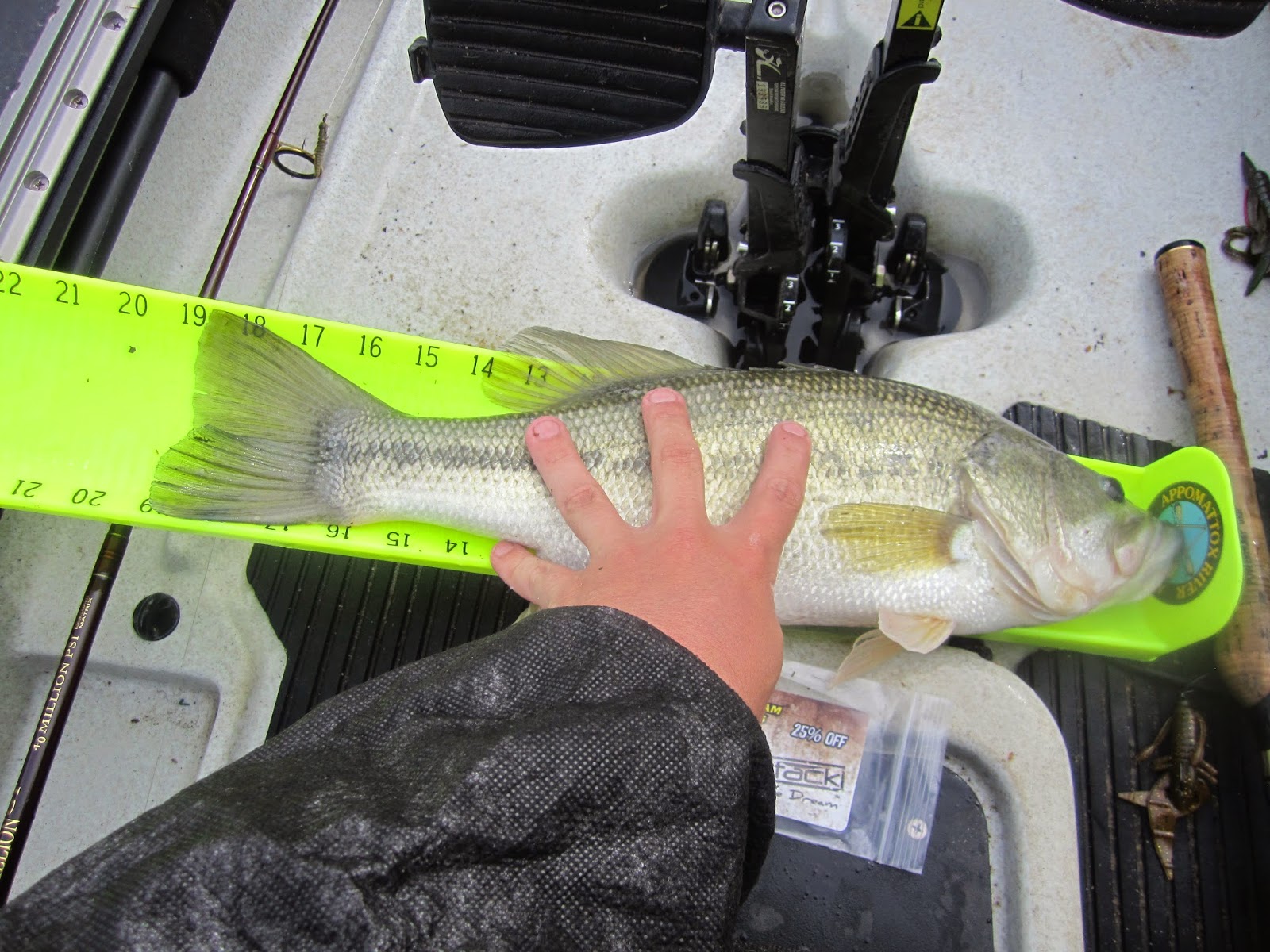 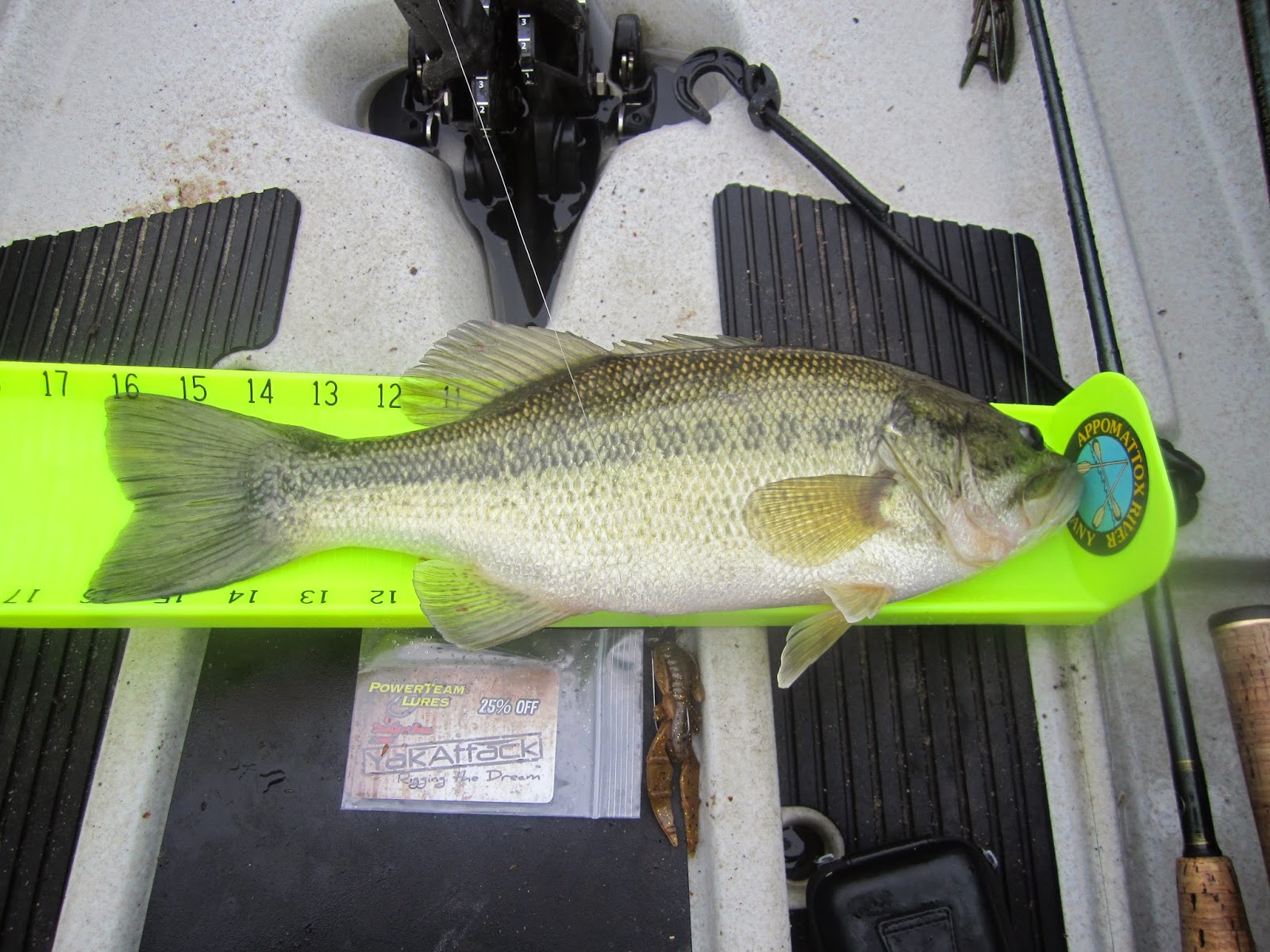 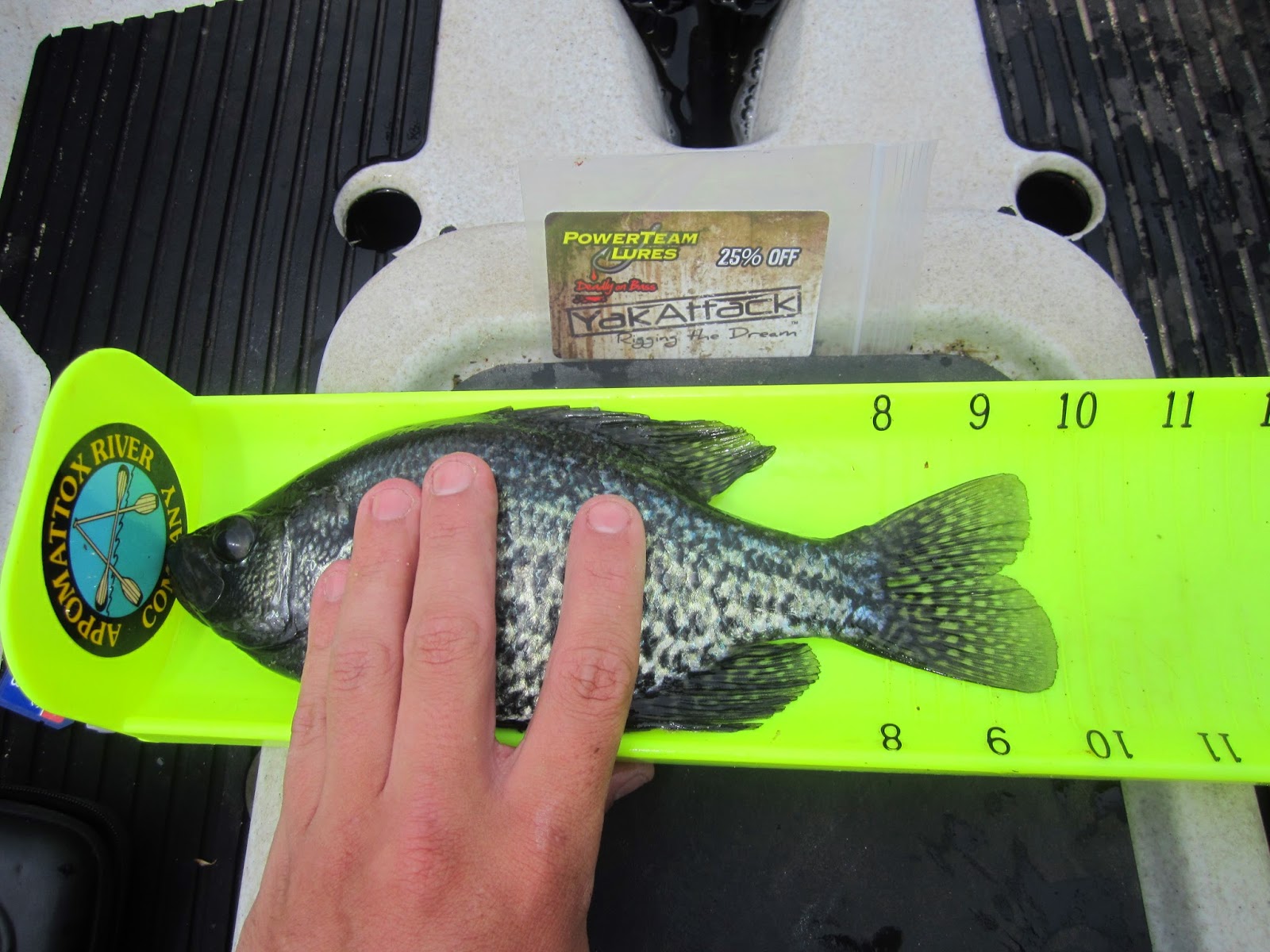 After getting an 8 inch crappie and two 8 inch sunfish tournament morning, I found myself back at Sandy…. and with Sandy came the wind. I’m not sure what hurricane blew up during my drive from Powhatan to Sandy, but sure enough, there were white caps on the lake. I launched anyway in hopes of bumping up my sunfish length total on a hot bed I found a few days prior, but the wind made that all but impossible. Everything had pulled of the banks with the waves breaking and the wind was too strong to try and sit stationary and vertical jig for them. So after about an hour’s worth of cussing the damn wind I packed it in for the final leg of my fishing marathon, the conference center bass. I did manage to run into Grant while at Sandy, we had not spoken since I left that morning. He managed two nice largemouth totaling 35 1/2 inches; he also had a 7 inch sunfish to go along with the pair. Grant said he was feeling good about his chances, it was only about noon and he had the rest of the day to catch a Crappie. This made me pretty weary. Grant is a great friend and a damn good fisherman…. but he always seems to be my stiffest competition when it comes to these events. Trying to keep myself thinking positive, I told myself there’s no possible way that dude could win two weekends in a row, and with a new found confidence we parted ways. Him chasing any Crappie that would hit, and me going after the big mama I had seen the night before. I already had a slam but it was only a measly 26 inches between three fish, in my mind pretty pathetic at the time… in hind sight I realize I was lucky to have that, many guys came back with two fish or less all day!

Pulling up to the Twin Lakes ramp at around 1 p.m., I knew I had a little under three hours to work on these two fish. I paddled over, scooted up the shoreline within eyesight of the bed, and locked my yak down next to the bank with my ParkNPole. Constantly studying the fish as I flipped the bed I noticed that the female was not locked down, meaning she had not dropped her eggs yet, thus making it much harder to get her to pick something off of the bed. Although, I did notice that both fish would swim in wide paths around the bed, just long enough for a few bluegill to cruise into their clearing, they’d then proceed to fly into the nest a full speed and swirl on the sunfish causing a pretty wicked wake in the shallow water. This gave me an idea; I tied on a Smithwick Perfect 10 jerkbait in blueback herring color, just about the right coloration for the bream that were pestering the bed. Sure enough after yanking the jerkbait directly over the bed and pausing it there just long enough, I finally pissed her off enough to strike. To true Josh Dolin luck, she managed to hit the bait in the back, leaving all three trebles exposed with no chance to hook her. Time passed and I simply couldn’t get them to hit anything else, with fear that they had honed in on my location I repositioned myself on the opposite side of the bed. After throwing everything and the kitchen sink at them I had a guy from Powerteam Lures bring me a Diesel Craw in black and blue flake. By this time I had a nice little audience considering I was the only fool still fishing, of course Grant showed up at about this time, and of course he had a decent slam. I still had hope, he had the exact same length between his crappie and sunfish that I did, paired with a 19 inch largemouth. This meant that if I could somehow manage to land the 20 incher I’d been staring down for the last two hours, I might just have a shot at winning.

With about 15 minutes to go before check in the big girl engulfed the shakey head. I set the hook with some serious force but she managed to tail walk me, thrashing her head as hard as she could, spitting the bait right back in my face…. I bailed out of the yak and after chucking my rod and a few choice words, it was all over. I checked in with three minutes to spare, initially bummed but my hopes at placing in a division rose as I began to hear the accounts of horrible fishing due to the stellar weather we all dealt with. 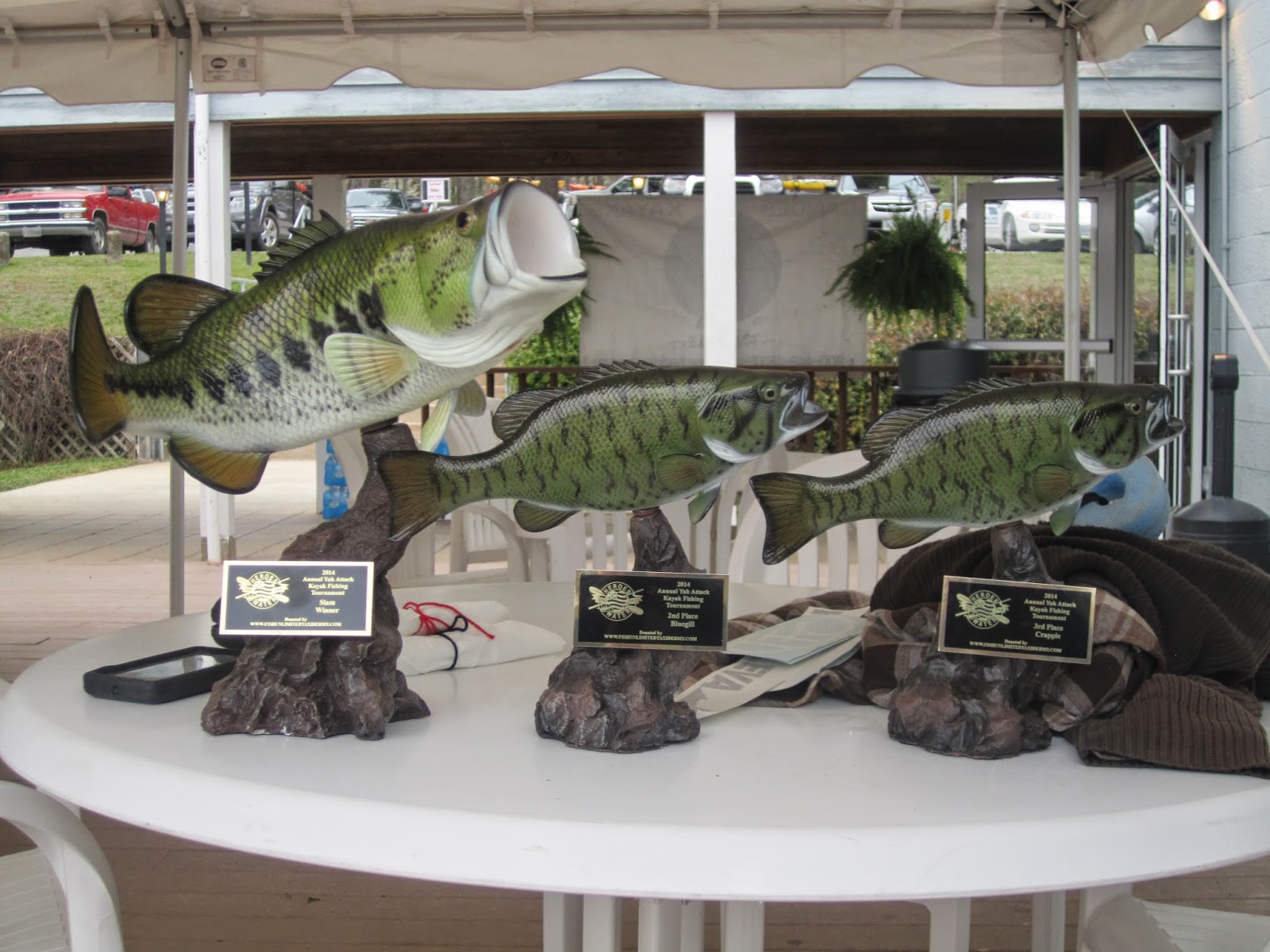 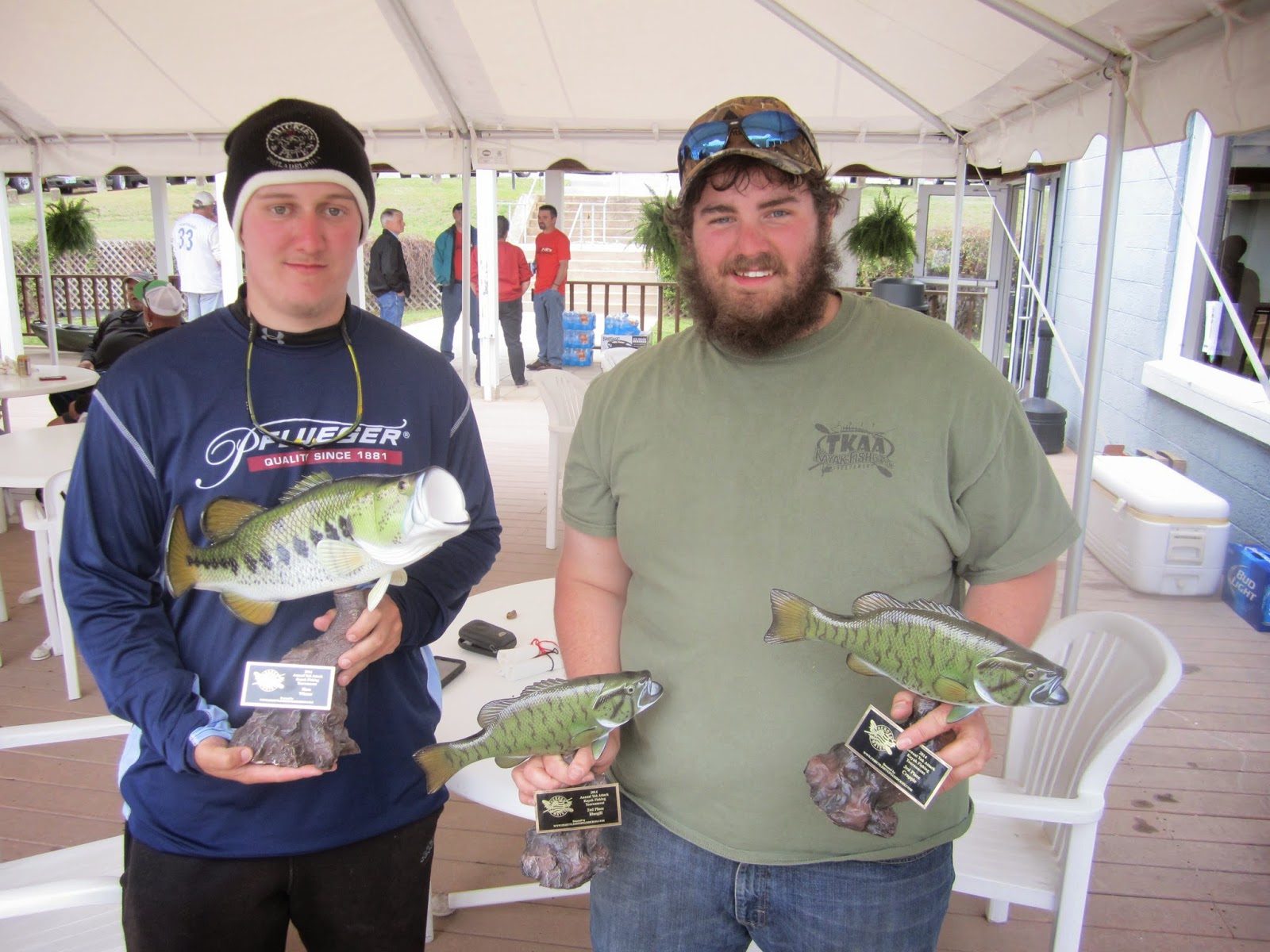 (Us holding the awesome looking trophies)

After sulking in the defeat that the hog molly dealt me, and striking out in the raffles, it was time to announce the winners. Turns out there were only three “Slams” caught all day, Grant’s, mine, and our new friend Forrest Short’s. As we had anticipated the weather made it hard to locate and capture the three species needed to complete the slam. Out of 131 people the three of us being the only people to manage to do that felt pretty cool. When it was all said and done Grant managed to win the slam, and I walked away with 2nd place in the Sunfish Division and 3rd place in the Crappie Division. It was a welcomed surprise considering the trophy was bigger than the fish I caught to win it! It just turned out to be that kind of day, a tough one but in the end a good one considering we all made it back in one piece. 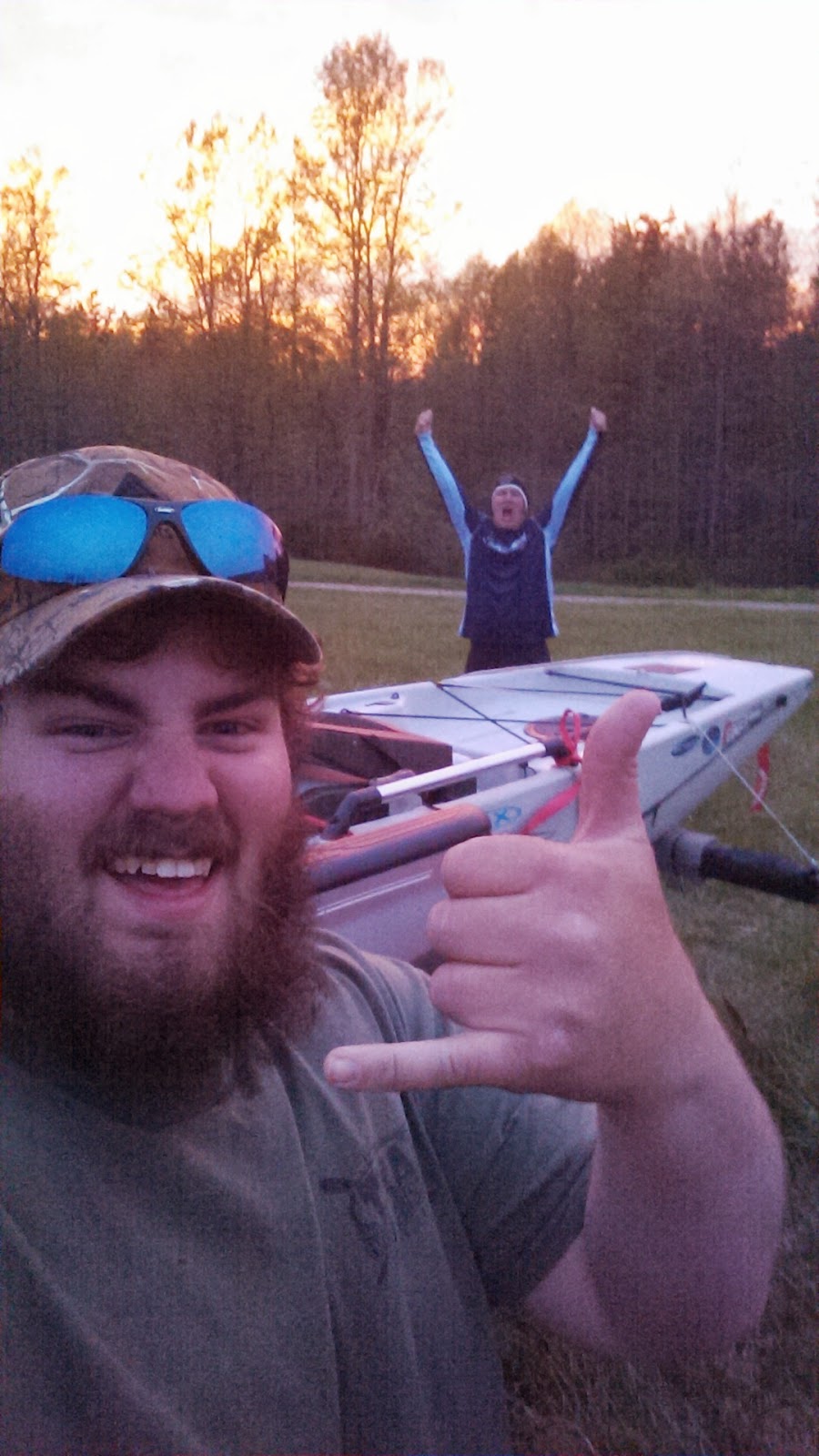 After the ceremonies were over it was time to wrap the tournament up the only way Yakattack knows how….. with the best damn pig pickin’ you could ask for! As if we didn’t do enough damage with the steaks the night before, we packed it in with as much bbq pork as we could without going into a food coma. We conversed with some of the coolest variety of characters you could imagine, all leaving a lasting impression on us. We drove away from Farmville as winners, not because of the trophies, but because of the new found friendships that we had built.... not to mention the event raised upwards of $10,000 for the Heroes on the Water organization, and for that, we should all be proud.