Welcome to the Thunderdome

Welcome to the Thunderdome 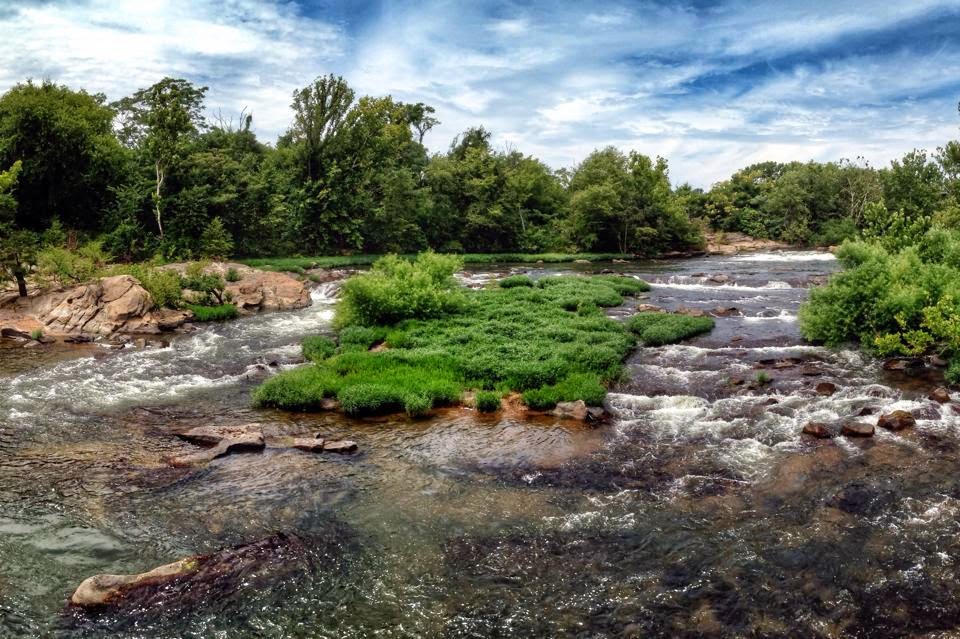 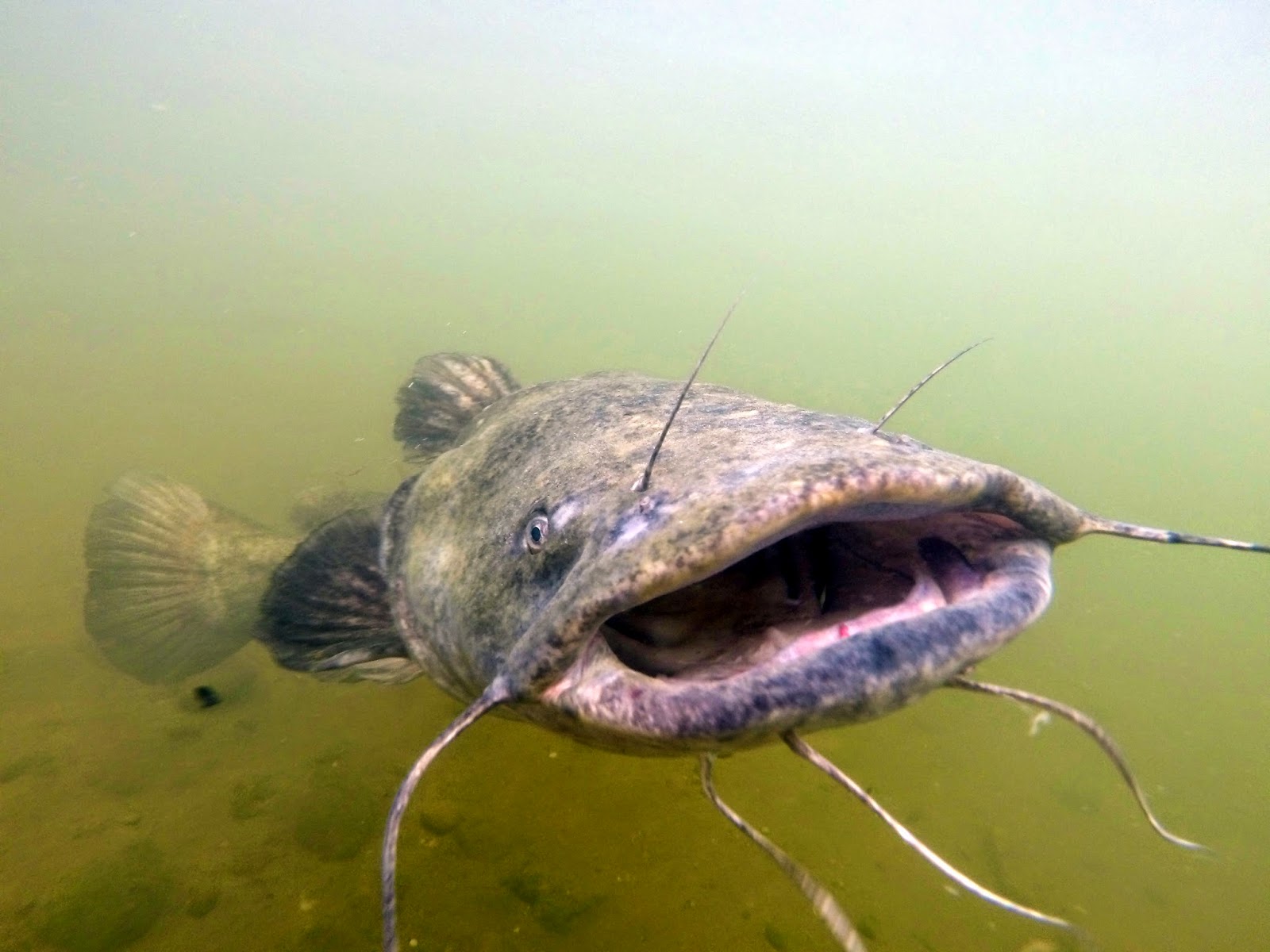 With my kayak on the operating table at Appomattox River Company in Farmville, receiving her necessary repairs for my expedition to Texas, I was left without a rig to continue chasing my Smallmouth Bass citation.  This has been the first time in nearly four years since I've been without a way to get on the water; needless to say it’s been a rather off putting period of time. With really no other option, I decided to kick it old school and fish in the style that truly got me started in “real deal” big game angling. That style would be wade fishing, more specifically, wade fishing for the big beautiful beast of the boulders, the Flathead Catfish. Now, any angler who is from here or currently resides here knows full well of the capabilities this city has for such an activity. Richmond is one of the few cities in the entire country where fishing of this style and caliber are present within view of high rise office buildings and high populated areas, an “urban oasis” in every form. 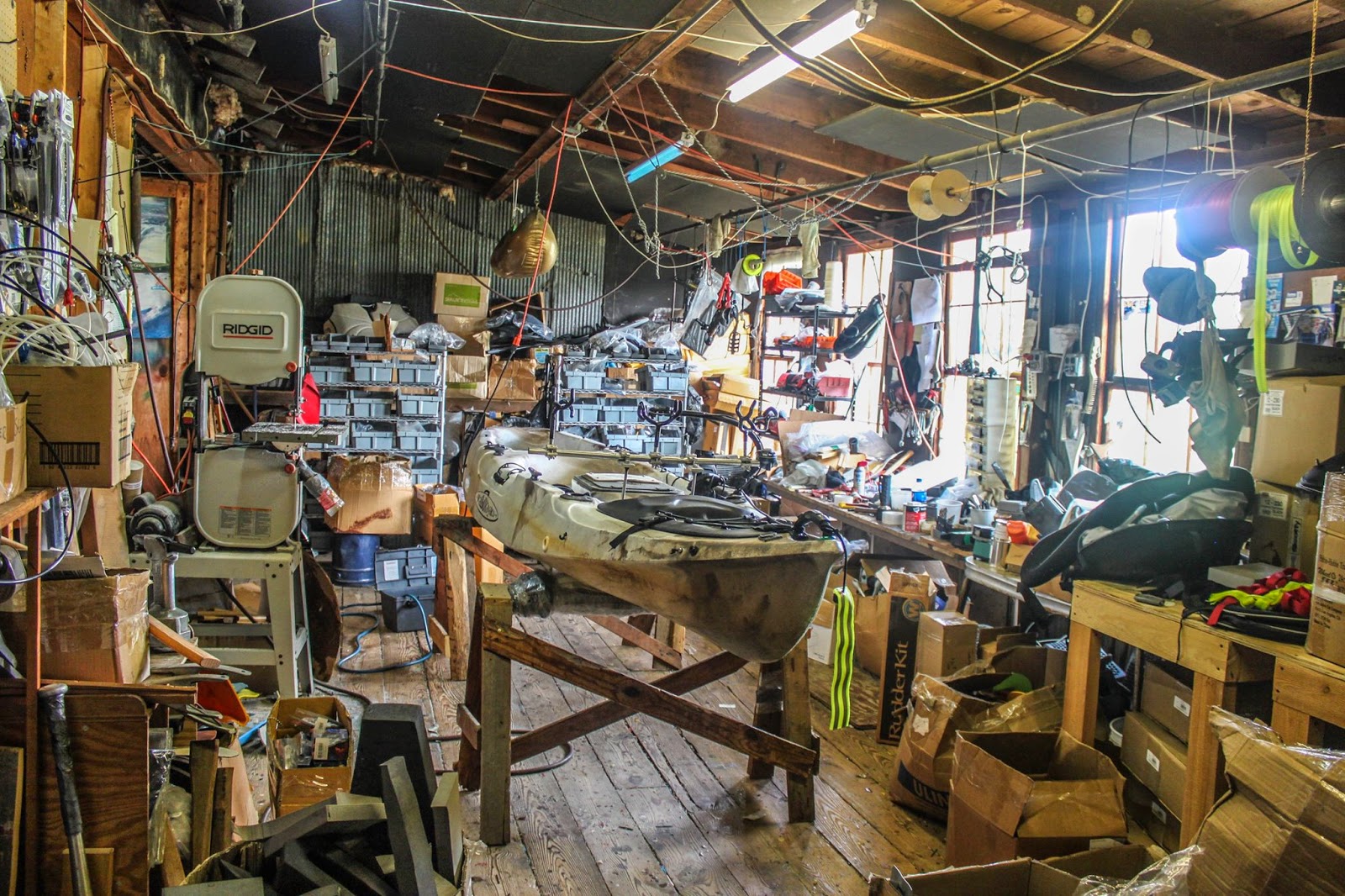 With the weekend fast approaching,  my buddy Adam and I quickly devised a plan that would get us out on the water bright and early Saturday morning to chase these beasts, and with any luck one of us would have a few picture worthy fish. As we set the plan into motion I decided to give my longtime friend Jack a call, he had been wanting to chase some flatties so this was an ample opportunity to put him on some fish.

We all met at sunrise to catch bait, Adam and I both running on very little sleep and Jack joining us fresh off of the night shift with the road paving crews of I-288. Though we were reasonably sluggish, we gathered bait pretty quickly and hit the James. We felt good about the day ahead of us. The water was unseasonably cool for July compared to its normal bathwater temperature and the sky was ominously gray with clouds, potentially yielding rain, ideal conditions to keep foot traffic down. Perfect conditions for stalking a giant. 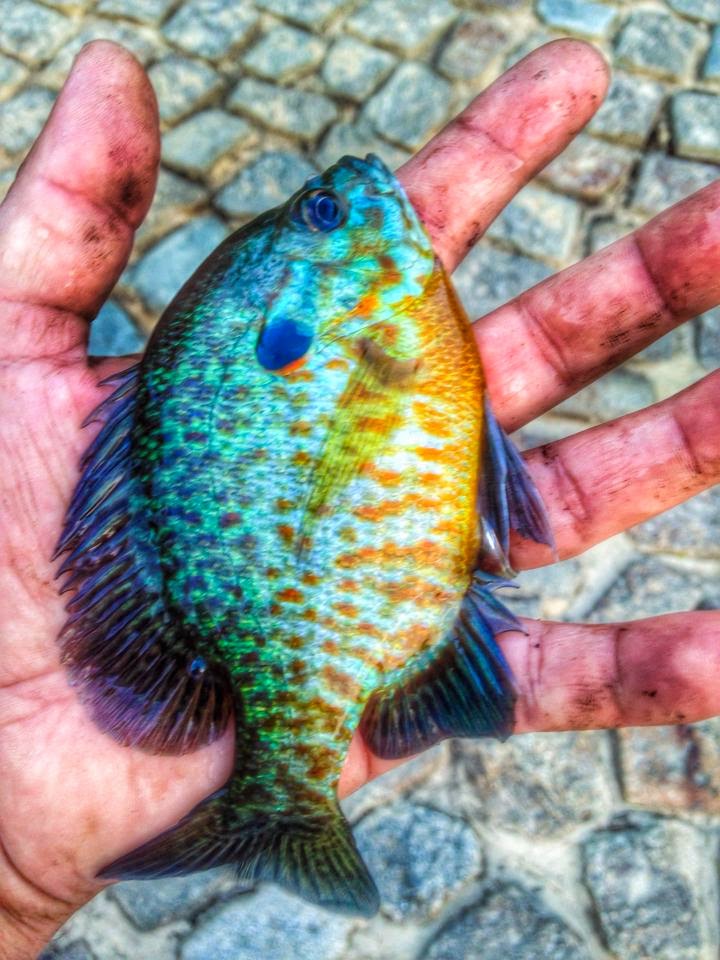 I led us to the first spot of the day, nicknamed “The Thunderdome” it is a very high pressured area, although, if targeted at the correct time it could yield some very large flatties. It wasn’t long before we got into our first fish of the day. Jack nailed a nice cookie cutter flatty at about 36 inches, a nice way to break the ice for both the trip, and his long flatheadless streak since moving to the mountains and back to RVA. 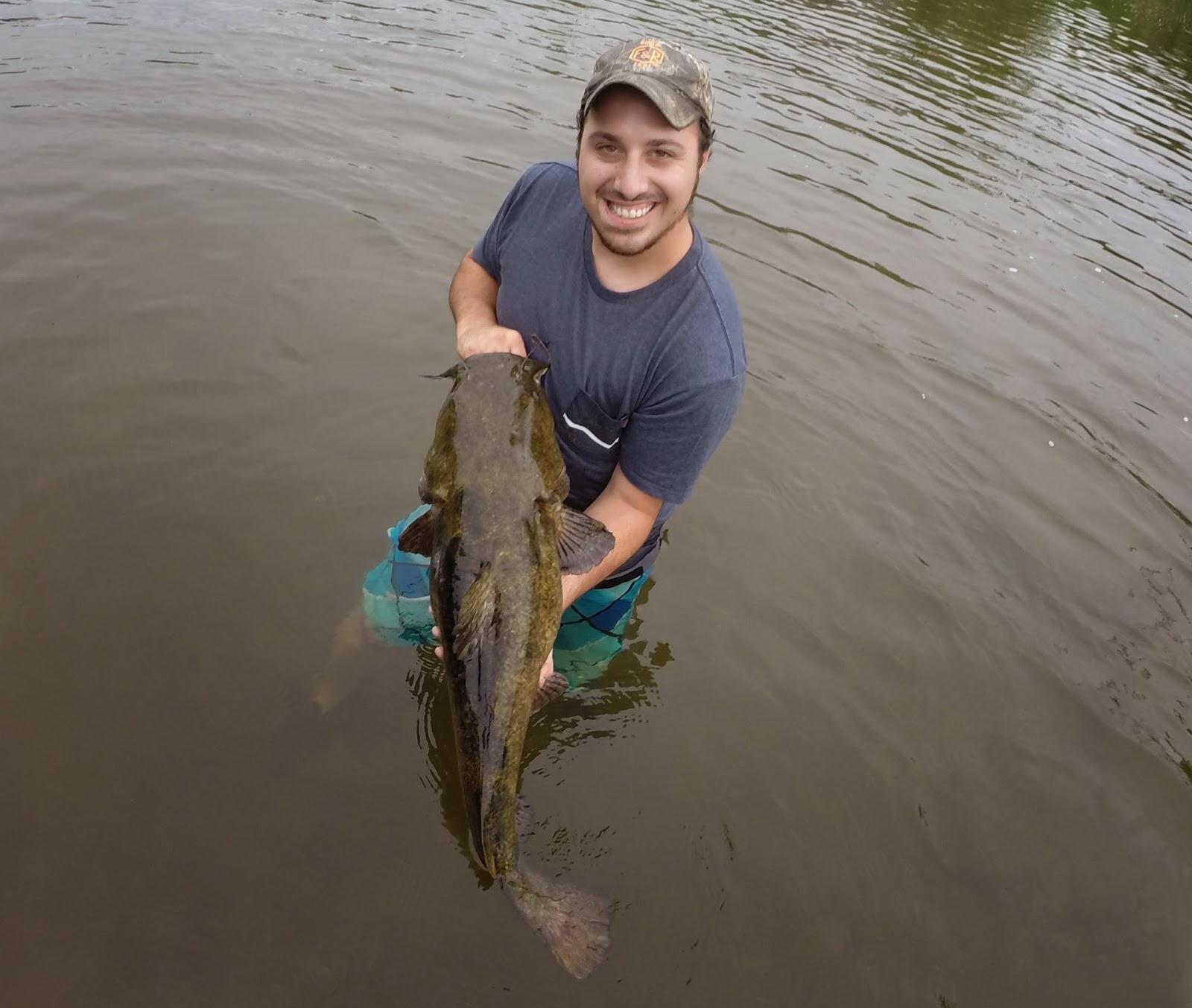 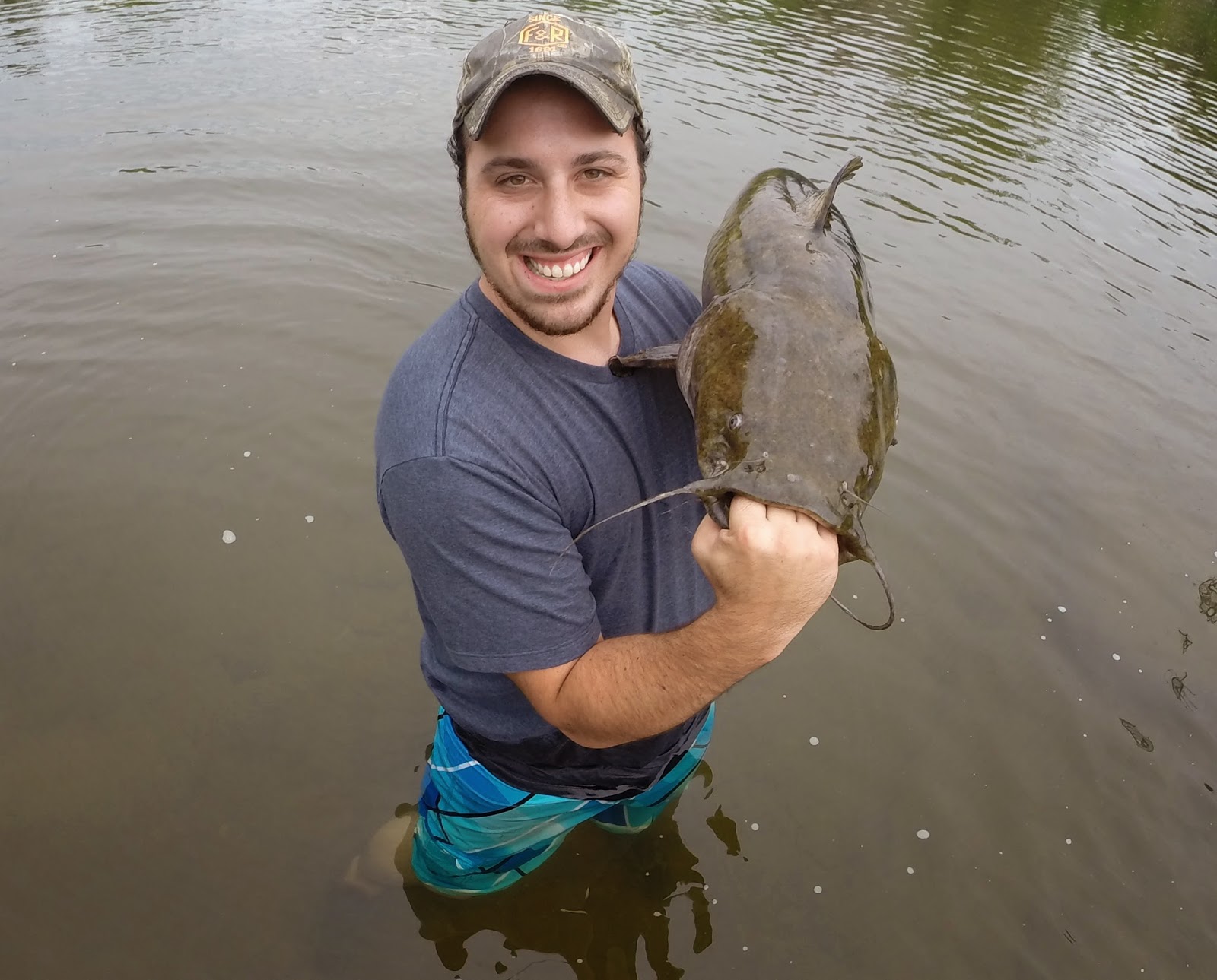 It wasn’t long after the first fish when he stuck the second.

However, this fish wasn’t playing any games. It muscled down to the bottom of the whole, ripping drag off of the Abu 7000, using its powerful tail to try and avoid capture. After a few moments of back talk from the beast it was all over, Jack was awarded his second flathead since returning to Richmond, and the first citation of his life. The big girl went a long 40 inches and a chunky 26 pounds, which is a pretty impressive feat to get a citation weight in the middle of July, flathead just aren’t as heavy this time of year. 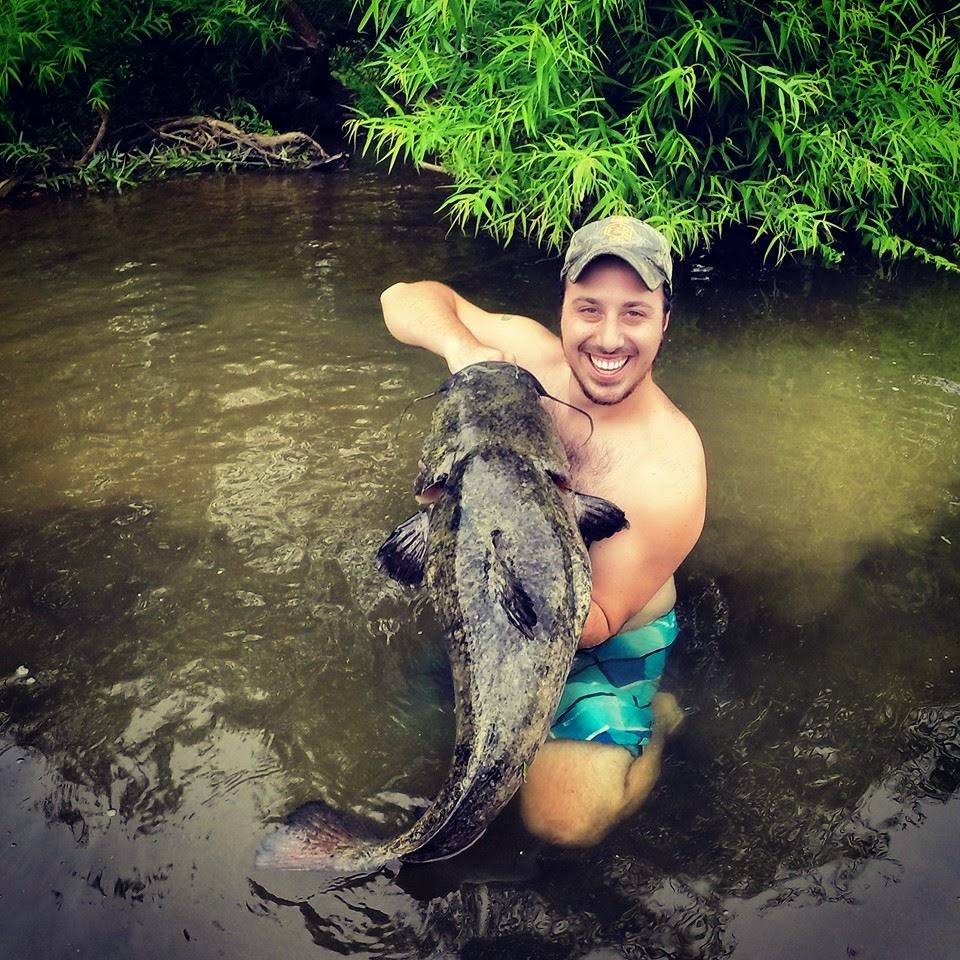 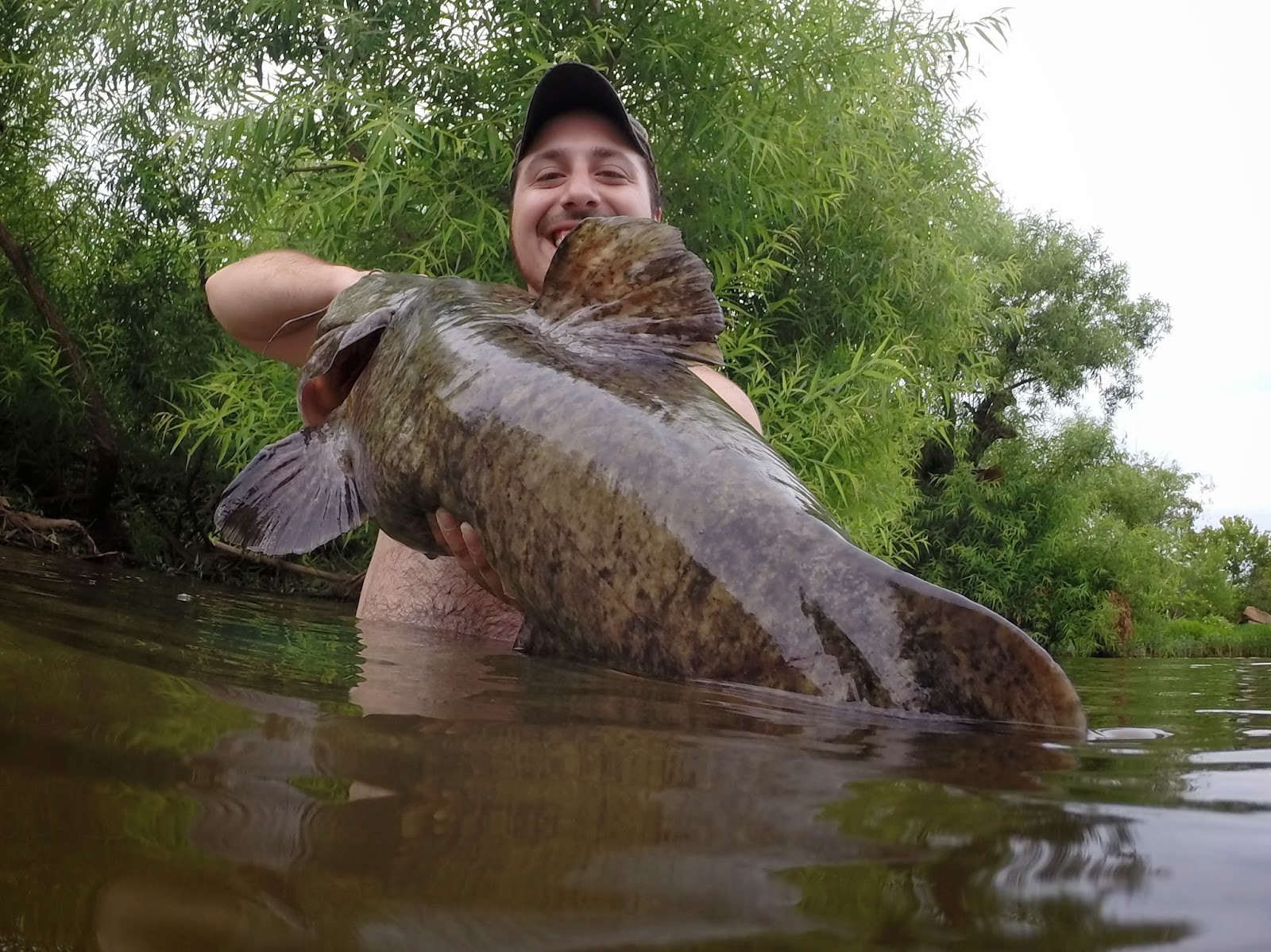 The rest of the day turned out to be more of the same, Jack landed another good fish, Adam broke off two heavy fish that took him into the rocks, and I managed one tiny flatty…. Although, I wasn’t too disappointed in my catch. I was more happy for Jack and relatively pleased at my ability to guide someone to fish, adding a little promise to the potential future of me becoming a licensed guide, but that’s neither here nor there. 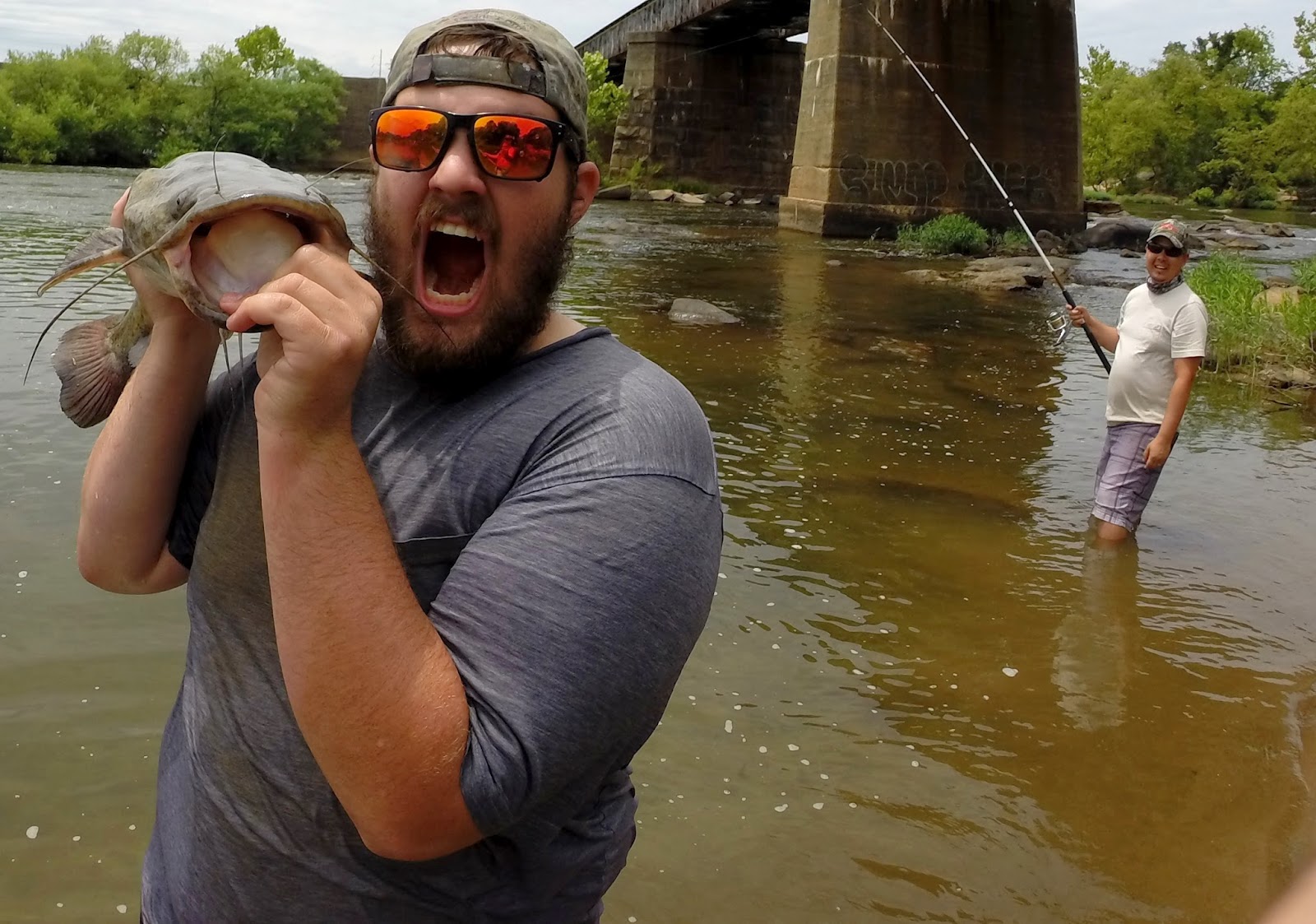 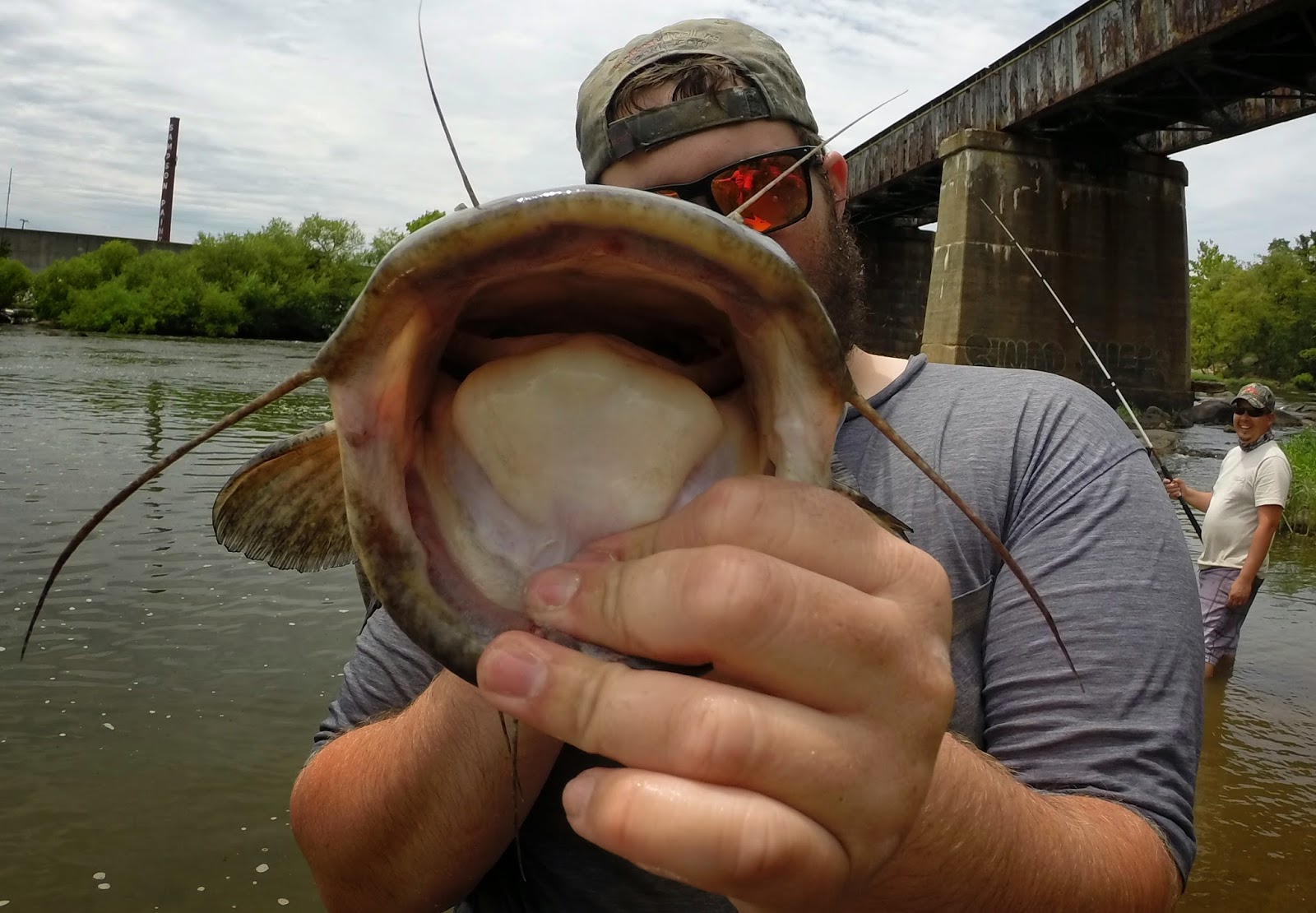 Sunday we had planned to duplicate the trip from the day before. We felt that we left some meat on the bone when it came to a few holes so we decided to hit them again and see which individuals we left behind. I got up a little later than originally intended and was slightly alarmed to find that I had no missed calls or texts. Come to find out my partners in crime did the same thing I did…. Except they extended their slumber a few hours longer. Normally I’d be a little upset that I had to go at it alone, but I looked at this as a chance to redeem myself for the previous day.

I hit the water under the same conditions as the day before, dreary and cool, horrible weather if you’re a hipster dude trying to “explore” or a tan chick trying to catch melanoma….. perfect weather for a bearded fish reaper with an eye for the big girls, flathead that is.

I targeted the all the spots in reverse, saving the Thunderdome for last. I started off with a decent fish at about 35 inches. She put up a good fight and even ripped a little drag, a good feeling after a few weeks without some serious pullage. 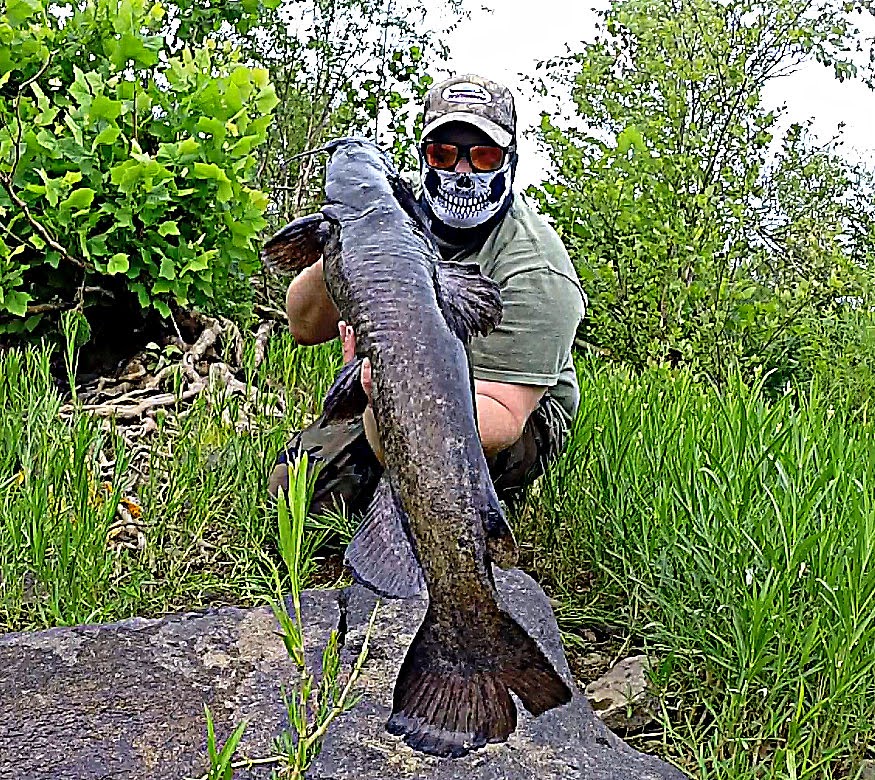 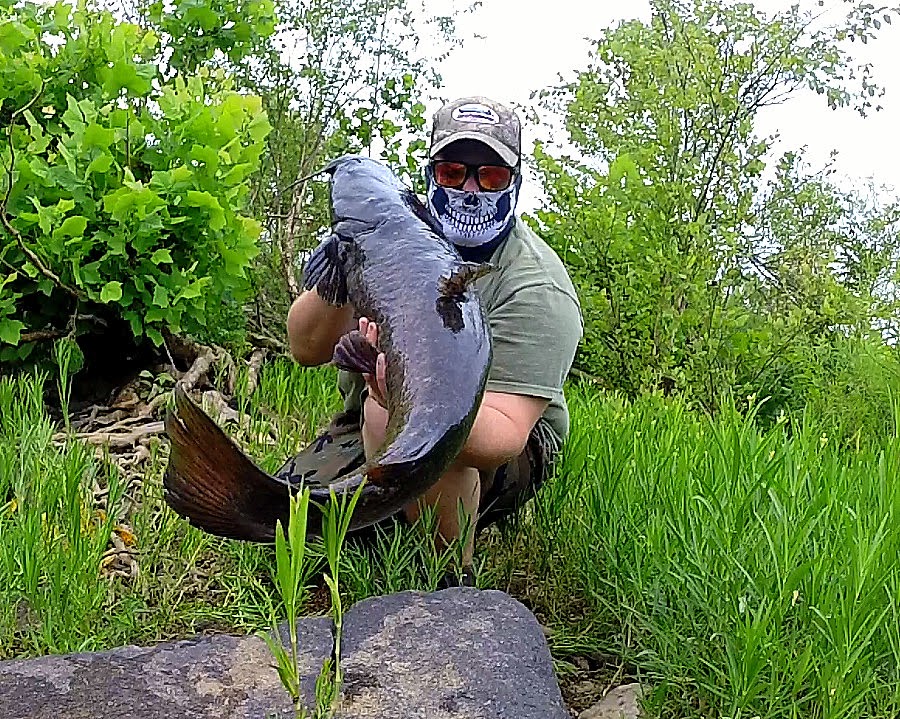 I arrived at the Thunderdome unsure of what to expect. We had pulled a few fish out already and I was uncertain whether or not they’d be spooked from the previous day. That question got answered for me about 30 second after my bait hit the water. Instant gratification came by way of brown beast. It didn’t let up for another 30 minutes, my bait would hit the water and wouldn’t be down there long enough to get its bearings before it was engulfed! 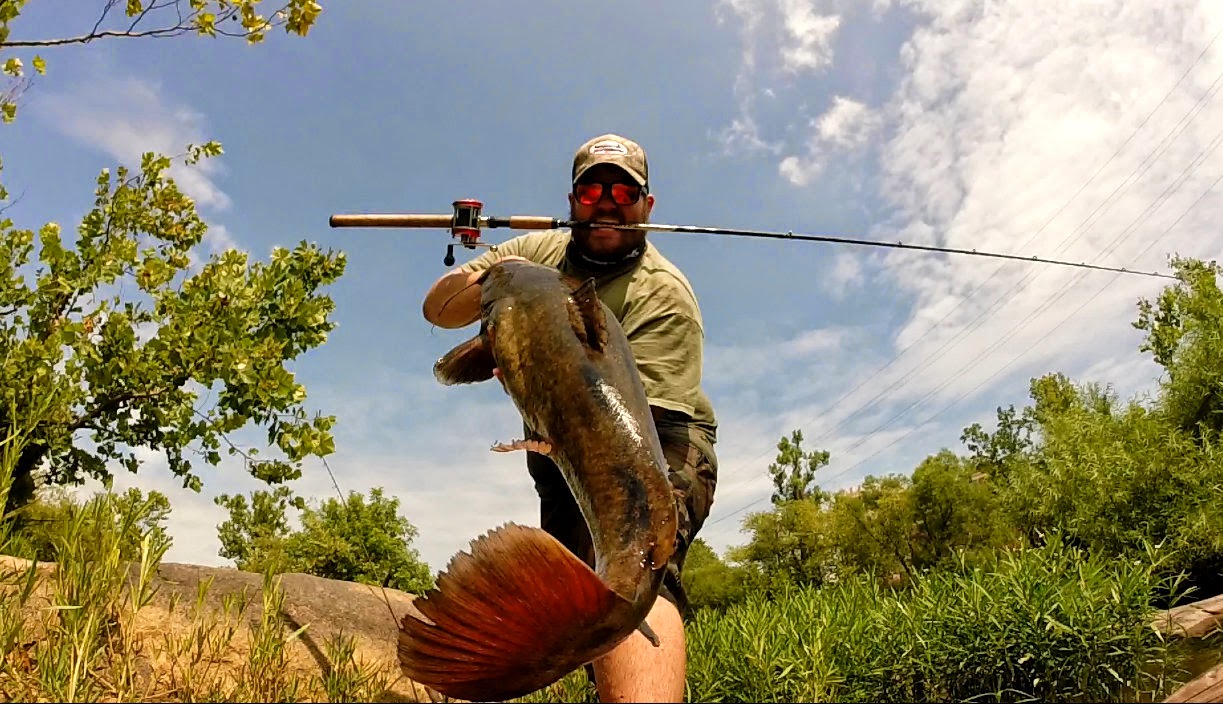 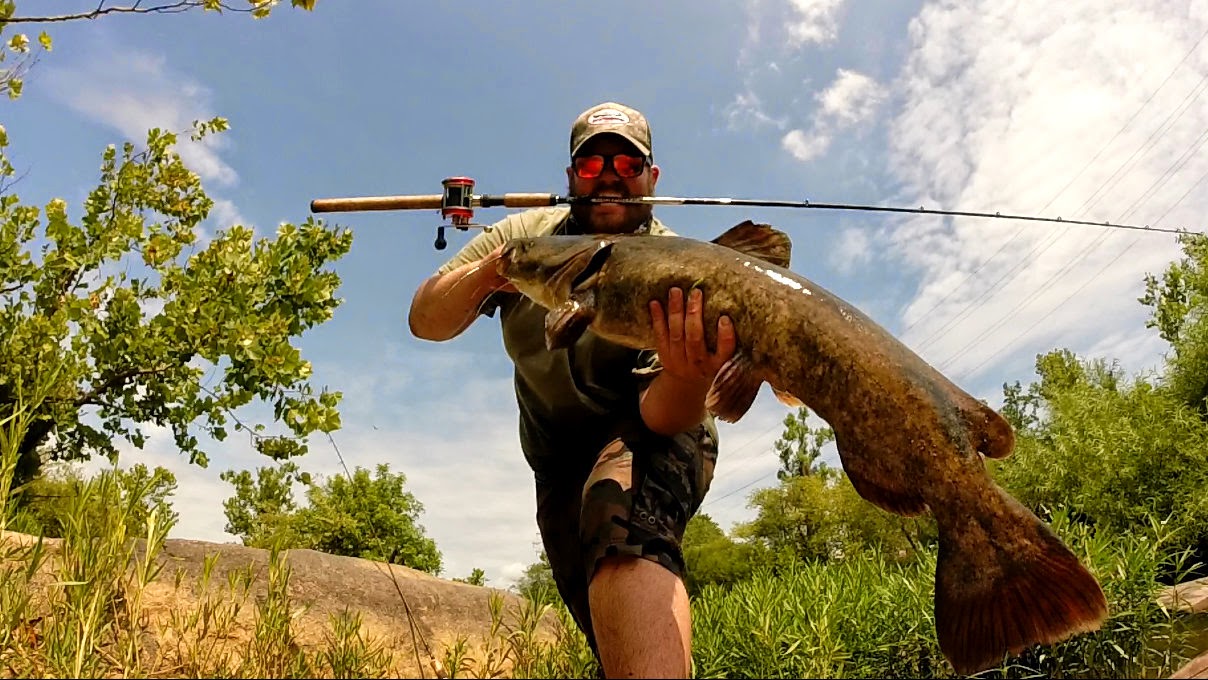 After running out of bait I decided to give it a rest. I took an hour long nap on one of the smooth river rocks to end the day, soaking up all the good fishing from the hours prior. It’s not too often that we come upon these days; cool weather, amazing water, low foot traffic, great fishing, and good friends, especially in mid-July on the weekend… that’s almost unheard of! It’s always great to have company, but I will forever cherish the solo days on the James where there are no people to be found. Just myself, the ancient rock of times long gone, the ever flowing water… here before us, here after us, nature thriving in perfect harmony, as peaceful as you could ever imagine….. until you set the hook. 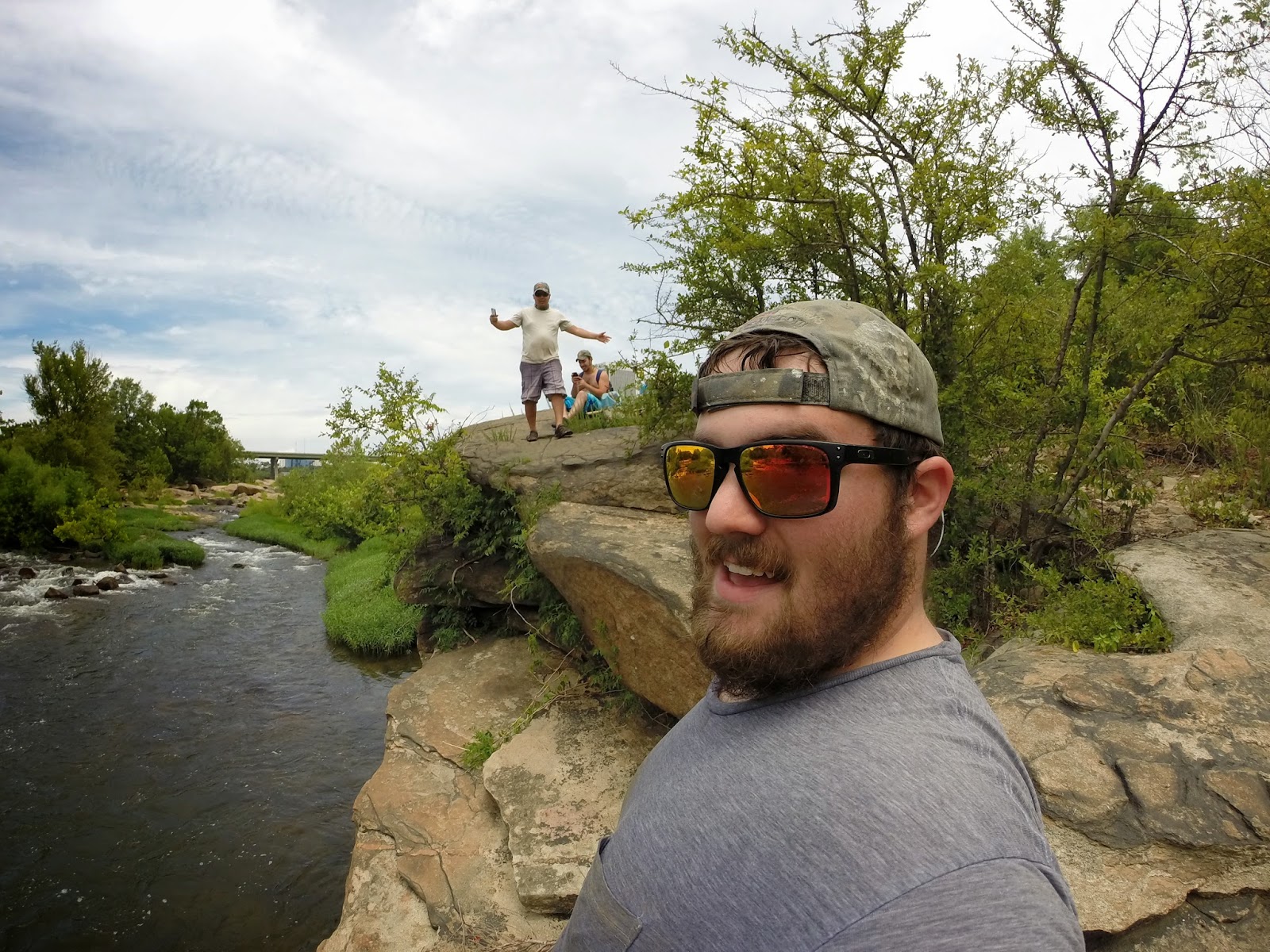 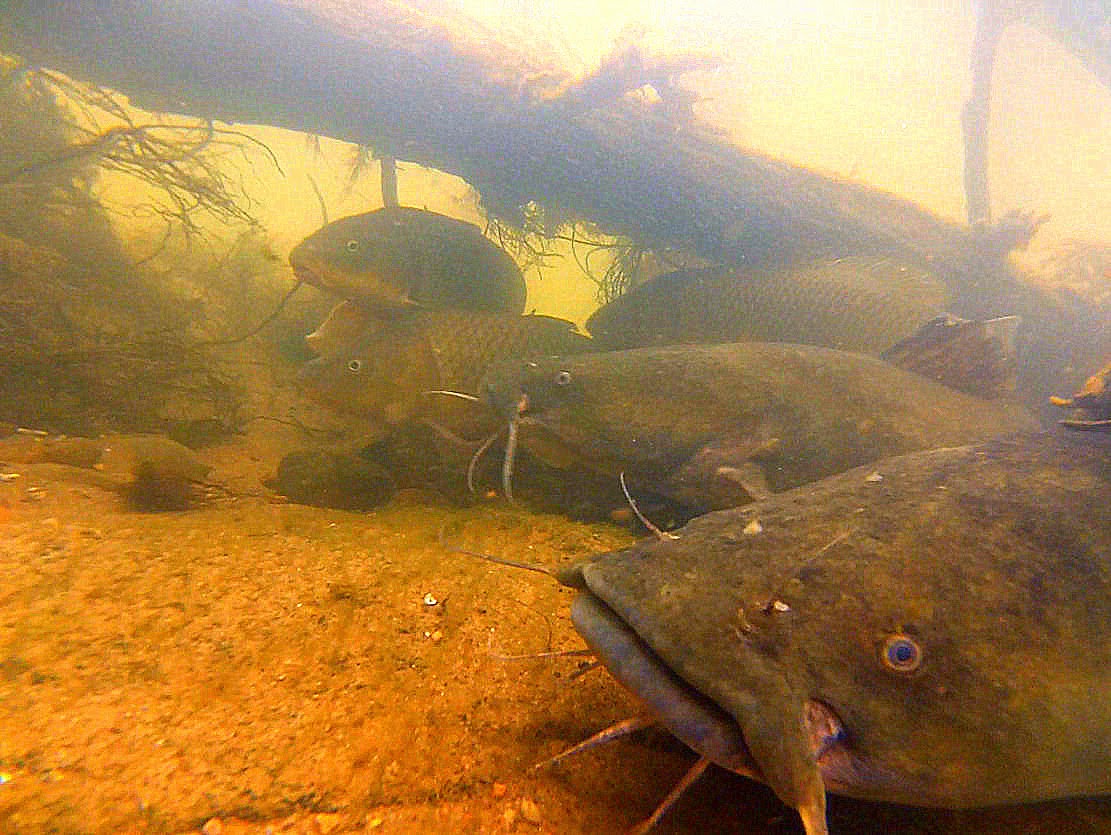