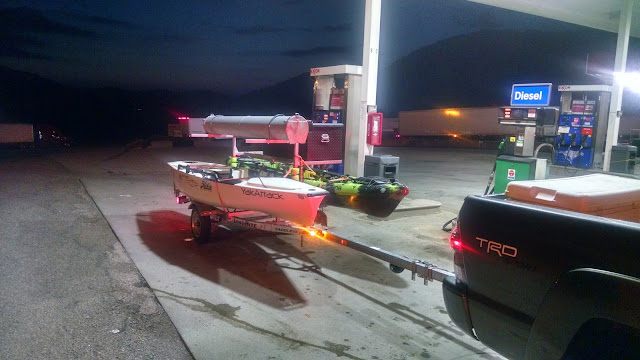 Grant and I loaded up the truck and hit the road early Friday morning with an optimistic plan, to knock out as many new species citations as possible. Grant needed a trophy Muskie, I needed a trophy Smallmouth Bass, and we were both in need of trophy trout. We had four days to try and accomplish our goals, starting with the trout. 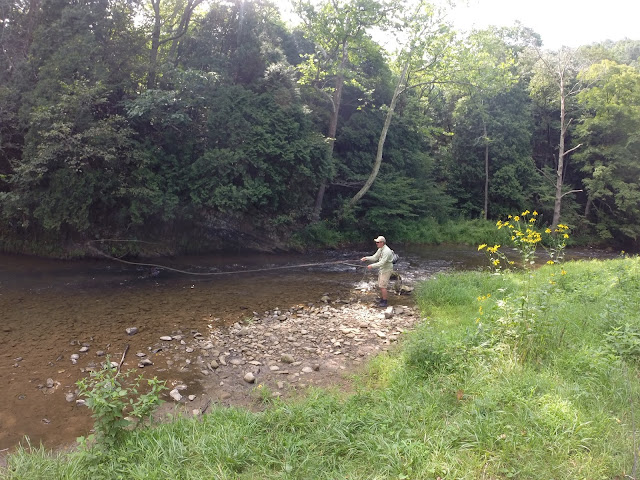 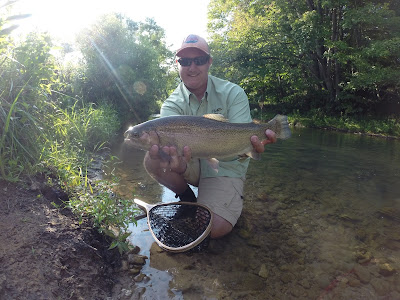 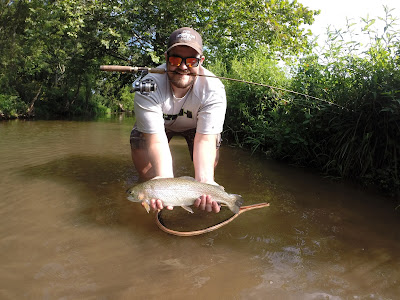 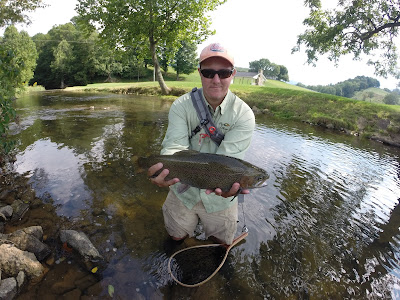 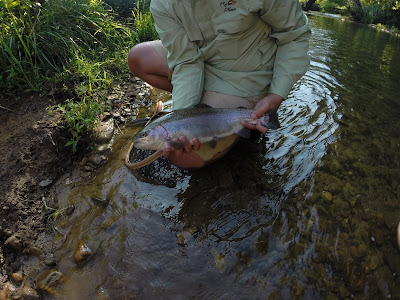 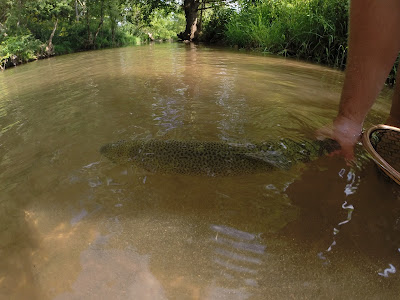 We had our feet in the water bright and early in a healthy trout stream known for boasting above average fish. It wasn’t long before we were hooking up with some seriously beefy Rainbows. Even in the heart of summer, the cold spring fed creeks keep these fish charged up, making them a formidable opponent. We both landed some good fish over a 12 hour period and roughly 8 miles hiked, but Grant managed to top off the day with the biggest fish either of us could have imagined. After spotting, stalking, and eventually coaxing it into striking, Grant landed a beast of a Rainbow Trout weighing in at a hefty 7 pounds and measuring 24 inches in length, a Virginia trophy. 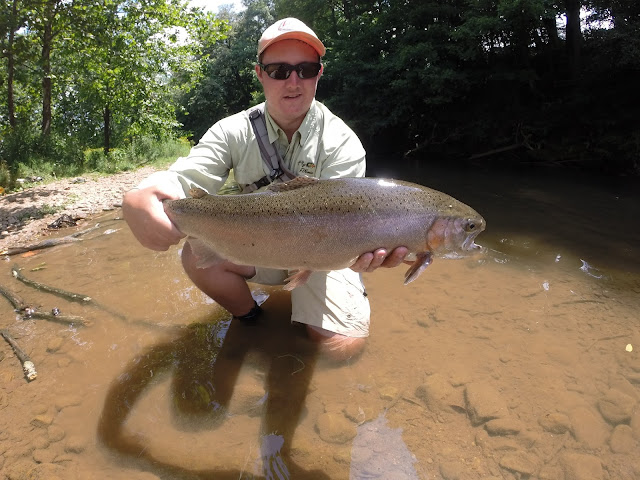 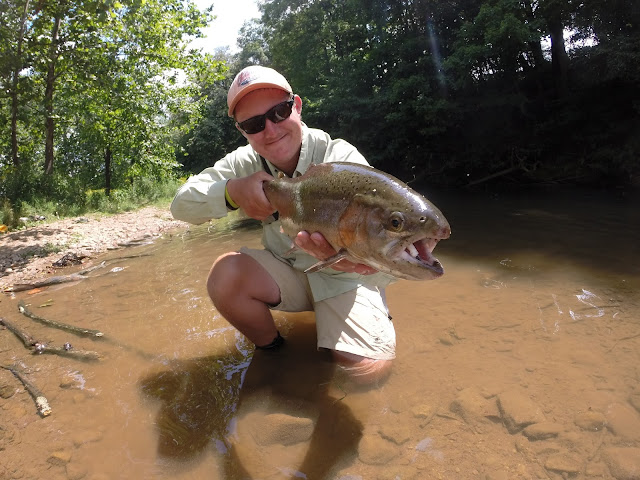 After we picked off a trout we then turned our attention to our favorite stretch of the New River. Abundant with both large Muskie and giant Smallies we felt pretty confident that we would both accomplish what we came to do. I focused on Smallmouth for most of the trip, picking off plenty of fish, just not any huge ones. We spotted and stalked many good upper echelon fish, unfortunetly, they all had lockjaw. None of our Smallies even came close to trophy qualifications; My biggest fish went just 17 inches on a black Booyah buzzbait. However, I did spend a decent amount of time targeting Muskie as well, it’s pretty hard not to… especially since I have a peaked interest in anything big with teeth. 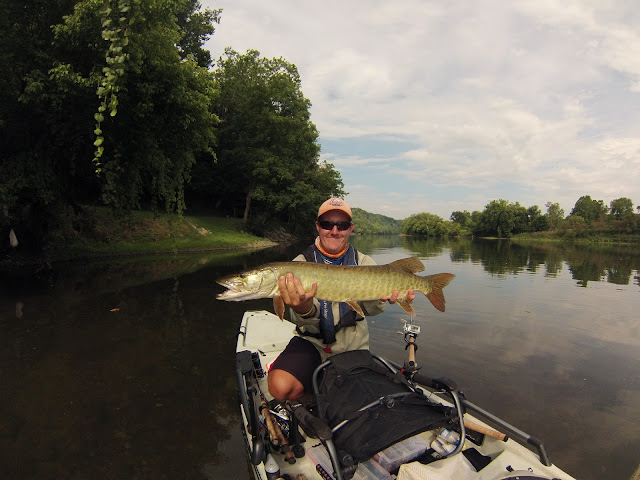 After breaking off a solid Muskie Grant managed to pick up where I left off. He bagged two Muskie using live Sunfish. Pike are a cold water species, therefore in the Summer when their environment heats up they generally become more lethargic and less apt to strike a very large bait. This is our reasoning for using Sunfish as opposed to the larger Suckers and Chubs we like to live-line in the cooler months. The smaller of the two fish went 38 inches in length, caught within our last hour of the trip. The largest, Grant’s newest trophy, went 43.25 inches in length, an impressive kayak caught fish for the heat of Summer. 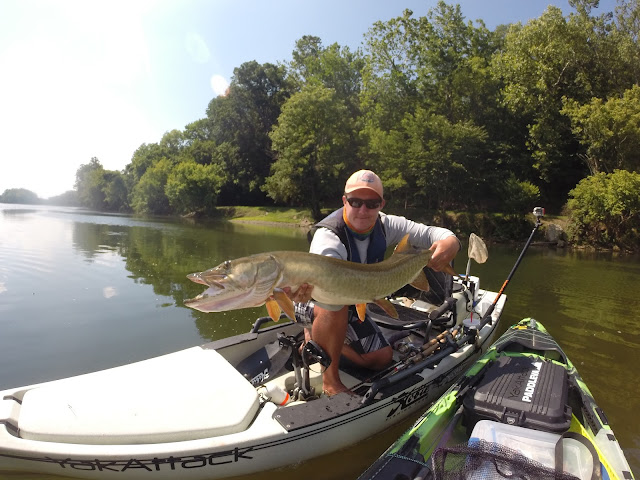 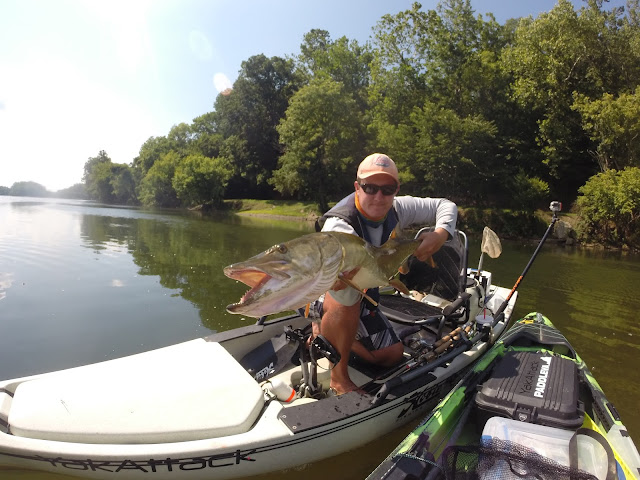 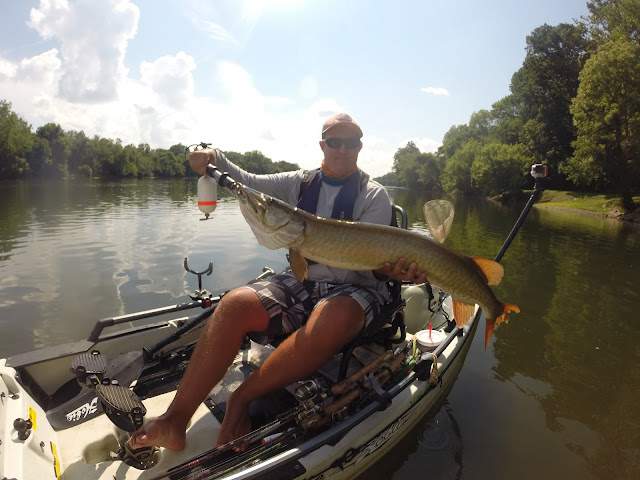 It was a great fishing bender filled with big, aggressive fish. Though I didn’t find the big Smallie I was after, it was cool to see Grant finally land the big Muskie he’s been chasing the past few years. Any time you can bag fish of that caliber during the heat of Summer you have to walk away with a sense of accomplishment, even if I did act as the cameraman for most of the trip…. But I digress, ha! Time to sit back and plan our next move. Although the heat is still constant right now, there are still big fish to be caught, hopefully one of those will be the notorious Biggie Smalls. We shall see.